I was born in Kempen, close to the Dutch border, but my parents soon moved to Stuttgart in southern Germany, where I was raised and attended school. My interest in art initially focused mainly on the modern and contemporary periods. Together with school friends I went on guided tours at the State Gallery in Stuttgart that were designed especially for a younger audience. I still have vivid memories of a tour of the Beuys Room with somewhat enigmatic explanations of the flow of energy from fat to metal and the unique importance to artists of the material felt. I was fascinated to learn that art was much more than “what you see is what you get” and it was then that I formed my ambition to study art history. During my undergraduate years in Würzburg I gradually came to focus on the art of the Old Masters. Then, when studying in Salamanca in 1993/94, I discovered the fantastic world of Spanish art. The year in Spain not only made a deep personal impact on my life but also established what would be an enduring love of Spanish art – possibly quite an uncommon area of interest among CODART members. 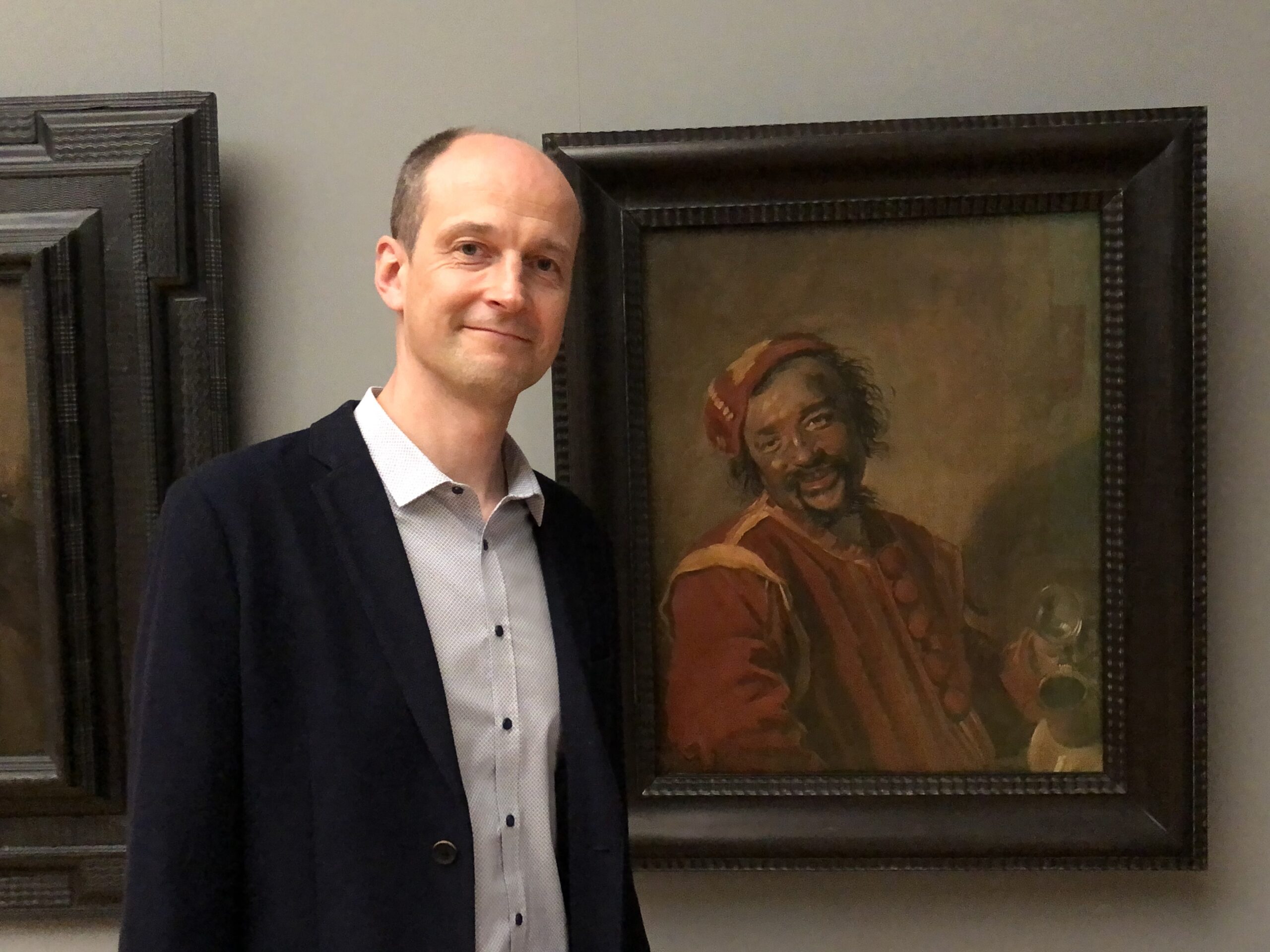 Justus Lange next to Frans Hals’ Peeckelhaering of ca. 1628-30

Nonetheless, I have retained my interest in modern art. In 1998 I had the opportunity to organize a small exhibition on Dostoevsky and German Expressionism in the museum of the University of Würzburg. Eventually, my research came to focus on the art of the Old Masters. After finishing my PhD on the Spanish-Italian baroque artist Jusepe de Ribera, I was appointed assistant curator at the Gemäldegalerie Alte Meister in Kassel in early 2001. I had the honor – and pleasure – to assist Bernhard Schnackenburg in the preparation of a major exhibition dedicated to the early work of Rembrandt (The Mystery of the Young Rembrandt). This project involved a partnership with Museum Het Rembrandthuis and the Rembrandt Research Project in Amsterdam, a wonderful cooperative venture that I will never forget. I think the exhibition in Kassel and Amsterdam increased our understanding of the genesis of Rembrandt’s art in many ways. Following that success, I curated an exhibition in Kassel (2002) on Martin Schaffner’s painted tabletop from 1533 and in 2004 another on Pan and Syrinx by Rubens and Brueghel, a painting that vanished during the Napoleonic occupation and was reacquired from the art trade in 2003.

In summer 2004 I was appointed curator of paintings, graphic art, and sculpture at the Municipal Museum of Braunschweig. This museum has enormous collections, the main focus being on the nineteenth and twentieth centuries. I curated many exhibitions there and collaborated with Julia M. Nauhaus to produce a general catalogue of the museum’s paintings (published in 2009), including hitherto unknown Dutch Old Masters such as still lifes by Michiel Simons and Daniel Seghers and Judith with the Head of Holofernes, from the circle of Jan Massys. 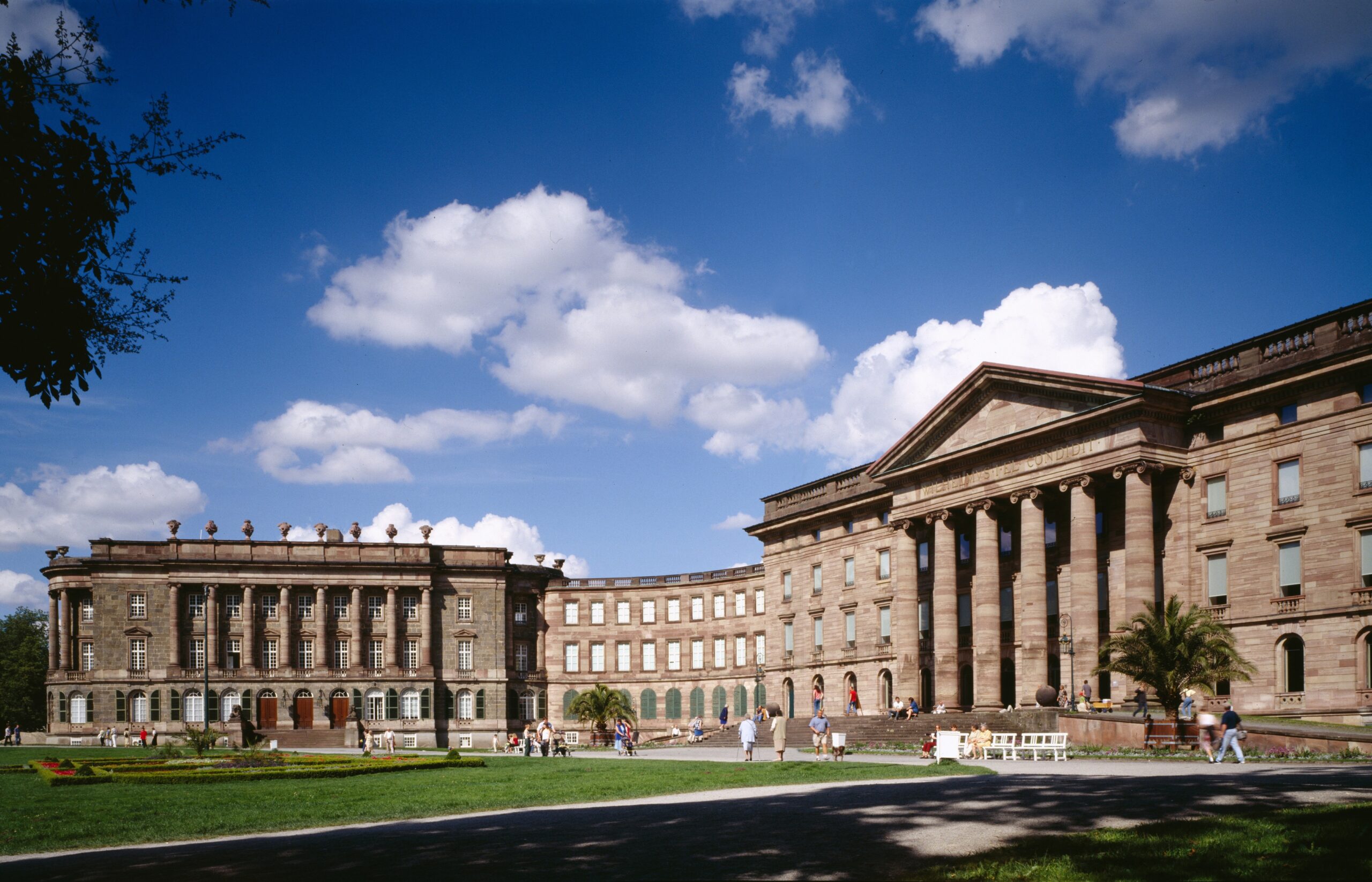 In December 2009 I returned to Kassel as Head of the Old Masters Picture Gallery (Gemäldegalerie Alte Meister). On the one hand it was almost like returning to my earlier work there. On the other hand, things in Kassel had changed. In 2006 the former State Museums of Kassel, to which the Gemäldegalerie belonged, had been combined to form a new institution: the Museumslandschaft Hessen Kassel (MHK). This meant that not just the museums and collections of Kassel but also its parks and palaces, which had previously been administered by the State Palaces and Gardens of Bad Homburg, now resorted under a single administration. This new institution aims to present a more comprehensive picture of the heritage of the landgraves of Hessen-Kassel, bringing together nature and art, parks and palaces, as well as the various collections. This transformation was honored by the nomination of the fantastic Mountain Park Wilhelmshöhe, with its Hercules monument at the highest point and its impressive water features, as a World Cultural Heritage Site in 2013. This unique combination of nature with artworks became a magnet for visitors. The Gemäldegalerie is located in Wilhelmshöhe Palace, in the heart of this magnificent world cultural heritage site.

The collection was first formed in the sixteenth century, but it was especially in the eighteenth century when the most important works were collected by Landgrave Wilhelm VIII, who may therefore be seen as the real founder of the gallery. An ambitious gallery project was carried out after a design by the famous architect François de Cuvilliés and paintings were displayed with modern top lighting. Unfortunately, this gallery was remodeled in the nineteenth century, and during the Second World War it was completely destroyed. A new picture gallery was built in 1877, which is now a gallery of modern and contemporary art. In 1974 the Old Masters were moved to Wilhelmshöhe Palace, which now displays a selection of some 500 works on three floors. 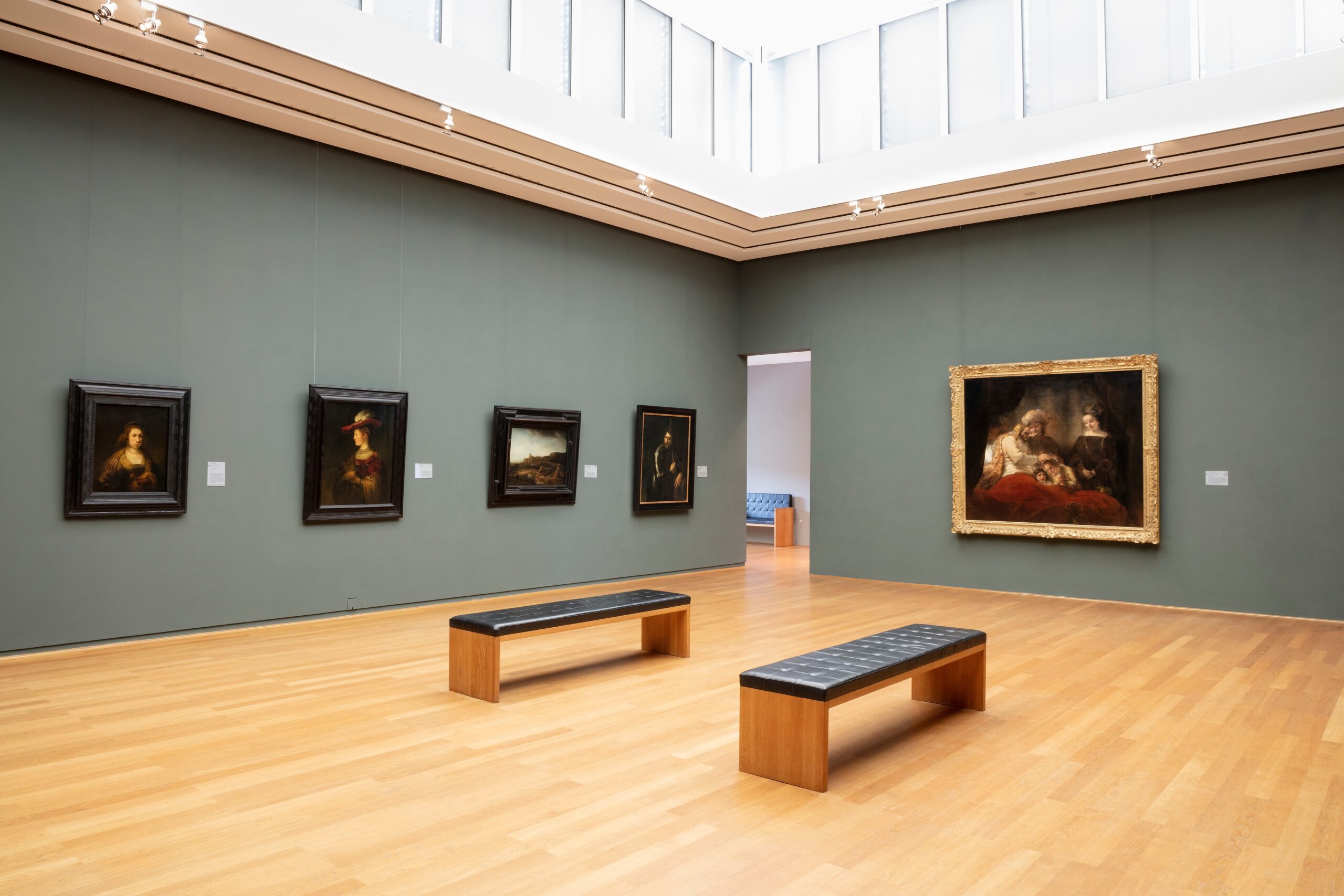 The Rembrandt Room in the Gemäldegalerie Alte Meister

Today the collection consists of over 2,300 paintings dating from the late fifteenth century to 1800. It includes many Dutch and Flemish masterpieces by Rembrandt, Frans Hals, Rubens, Van Dyck, Jordaens and many others. In addition, it retains important holdings of German, Italian, French, Spanish and British works of art. The whole collection can be searched in our online database www.altemeister.museum-kassel.de which is constantly updated. It is a great responsibility to be in charge of this collection, but it is also a privilege to see these masterpieces at close quarters every day.

Choosing my favorite artwork is scarcely possible, but I would like to single out Adriaen van de Velde’s Beach at Scheveningen. This wonderful picture is not just a fine example of his landscape painting but it also shows how tranquil and beautiful this beach once was. And especially in these challenging times of the pandemic, it prompts a desire to stand looking at the sea, arms crossed behind your back like the figure in the foreground – and to enjoy a pleasant day’s outing. 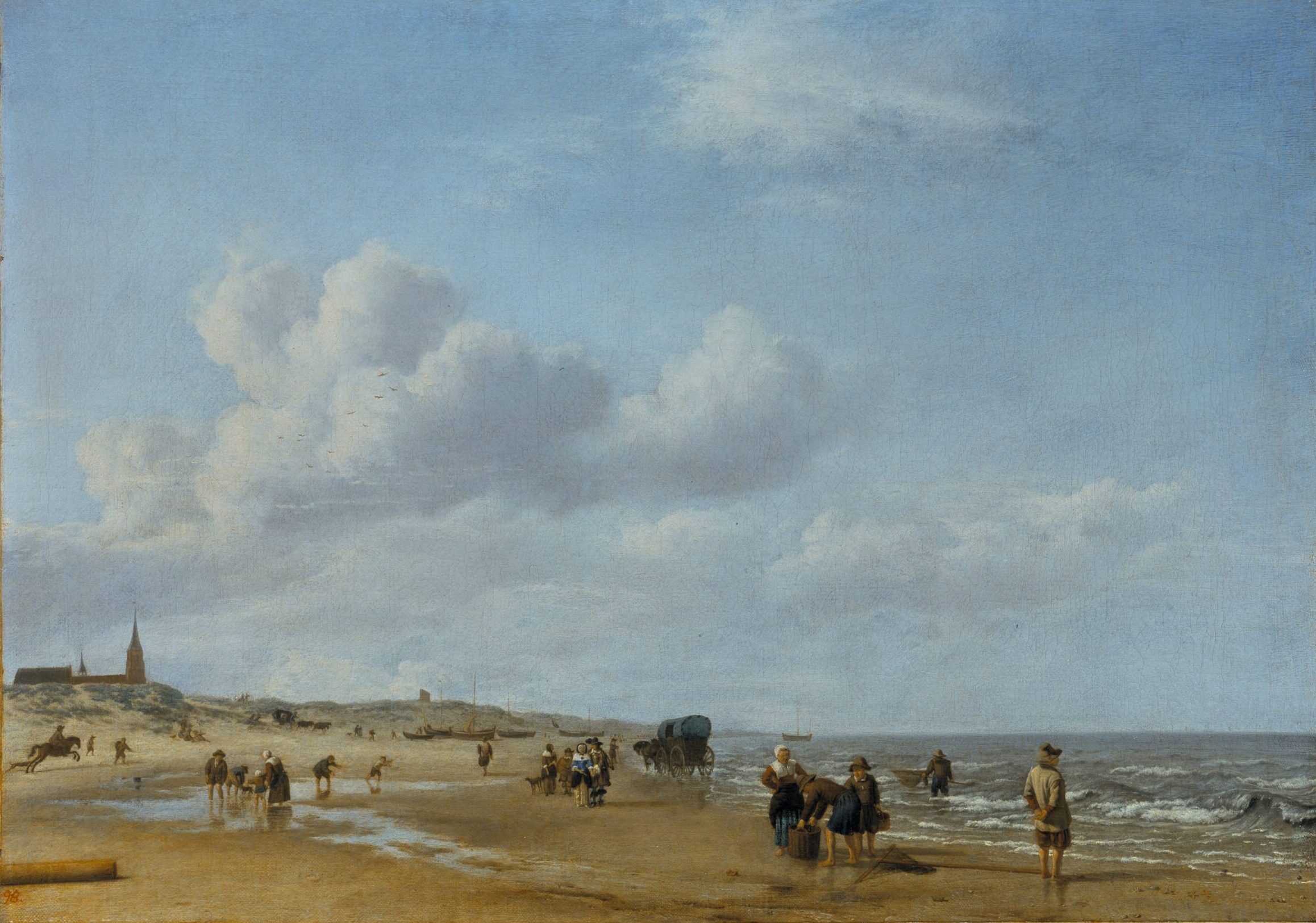 Until the late 1990s, temporary exhibitions played only a minor role at the Gemäldegalerie. With the rise of museum exhibitions, it became clear that cooperation with national and international institutions would be crucial to the gallery’s further development. I really enjoy this collaborative work. In 2011 I curated the exhibition Light Structure: The Light in the Age of Rembrandt and Vermeer together with the Berlin research group Historical Light Structure, which explored the role of light in Dutch Old Master paintings. In 2013 we worked with Joost Vander Auwera and Irene Schaudies of the Royal Museums of Fine Arts in Brussels to organize the exhibition Jordaens and the Antique, the first exhibition dedicated to this great master in Germany. It focused on the artist’s deep relationship with classical art. In 2018 I had the pleasure of working with Marlies Stoter of the Fries Museum in Leeuwarden to produce the first exhibition dedicated to “Rembrandt and Saskia.” It combined art-historical research with sociocultural aspects of love and marriage in the seventeenth century.

I am currently preparing an exhibition on Johann Heinrich Tischbein the Elder – maybe Kassel’s most important artist. It is scheduled for late 2022, to coincide with the 300th anniversary of Tischbein’s birth. Another ongoing project is the technical research on our early Netherlandish paintings, conducted together with our conservation department. We hope that this will culminate in an exhibition combining artistic and technical findings as well as insights on the creative process of painting.

From time to time I give lectures at the university. It is a truly satisfying task to present the art of the Old Masters to younger generations of students. As our society becomes more and more diverse, finding appropriate ways to discuss paintings that were made 300 or 400 years ago is both challenging and inspiring. As issues of gender, equality or diversity are raised, it is up to museums to deal with the questions that arise. I have always taken a special interest in contextualizing artworks: not just placing them in their historical setting but also showing their relevance to our own time. What does Rembrandt’s Jacob blessing Manasseh and Ephraim have to teach us, for example? How can we deal with issues of gender when gazing at Rubens’s Jupiter and Callisto or a still life by Rachel Ruysch? Whenever we look at an Old Master painting, it has something to teach us not just about the past but also about our own times. Sometimes one even might feel the need to change – we recall the last line in the famous poem by Rainer Maria Rilke, which he wrote while gazing at an archaic statue: “You must change your life.”

Amid these changing and challenging times, I am delighted to be part of the great network of CODART, where questions such as these are discussed in the spirit of open-minded discourse.

Justus Lange is Chief Curator at the Gemäldegalerie Alte Meister, Museumslandschaft Hessen Kassel, Kassel. He has been a member of CODART since 2009.