I was fascinated by art from an early age. In my teens I would browse through my parents’ art books and took weekend classes in painting at the local art school – I still paint to this day! My earliest memory of being moved by art was at the Rubens exhibition at the Royal Museum of Fine Arts Antwerp (KMSKA) in 1977, which I visited with my parents. I felt an immediate sense of exhilaration there. I particularly remember gazing up in awe at Rubens’s Head of Medusa, which was on loan from the Kunsthistorisches Museum.

After secondary school I studied art history at Ghent University and went on to train as a restorer of paintings at the Higher Institute of Fine Arts in Antwerp. I wanted to dedicate myself to the conservation of art. In 1994, I joined Professor Arnout Balis as a PhD student in a project to investigate the underdrawing and underpainting in the work of Peter Paul Rubens with the aid of infrared reflectography. This had a decisive impact on the direction of my career. In the years that followed, I was immersed in the voluminous and somewhat intimidating art documentation at the Rubenianum. It was not until 2005 that I obtained my PhD at Leuven University (KUL), with a dissertation on Functions of dead coloring with a particular study of the underpainting stage in the work of Peter Paul Rubens. Part of this dissertation was published in the Antwerp Royal Museum Annual of 2008.

In December 1999, KMSKA’s director Paul Huvenne invited me to curate a small show in Salamanca. This launched my career at the museum as an exhibition curator, after which I served as curator of seventeenth-century paintings and then head of collections. Today, I work with a team of six curators and three conservators. I joined CODART in 2004, soon becoming a member of the program committee, and last year I was elected as a board member. My strong ties with the organization have proved vital in getting to know other museum curators worldwide, and I would warmly urge new curators to become part of this thriving community. I find the exchanges of knowledge about Dutch and Flemish art among CODART members to be a permanent source of inspiration. The annual congress and CODARTfocus meetings are events I look forward to with great anticipation!

In my early museum years I coordinated several exhibitions. I still vividly remember the making of the exhibition ExtravagANT! Antwerp Painting for the European Market 1500-1525 (2006), in partnership with the Bonnefanten Museum in Maastricht, as well as Prayers and Portraits: Unfolding the Netherlandish Diptych (2007), in collaboration with The National Gallery of Art in Washington. Soon, I was also curating exhibitions, such as Copyright Rubens (2004-2005), a show on Rubens prints for KMSKA and the Musée National des Beaux-Arts du Québec. Together with my inspired colleague Hildegard Van de Velde, I organized several exhibitions at the Rockoxhuis, including Papegaei (2015), about the making process and restoration of Rubens’s Madonna with the Parrot; the small, jewel-like Power Flower: Flower Still lifes in the Netherlands 1580-1750 (2015/16); and the landscape exhibition The Sky is the Limit (2017). The most ambitious exhibition project I undertook was undoubtedly Rubens and His Legacy (2014/15), curated for Bozar in Brussels and the Royal Academy in London. I am currently preparing an exhibition on Tronies: Faces in Northern Art (1500-1700) with my colleague Koen Bulckens, a show produced in collaboration with the National Gallery of Ireland, which is partly based upon my own research on Rubens tronies and published as a Corpus Rubenianum volume in 2020.

In 2011, KMSKA closed its doors for renovation. The building no longer met the requirements of a modern museum. Several problems had to be addressed. Partly built on the foundations of the Duke of Alva’s citadel, Antwerp’s monumental temple of the arts had stability problems. Large quantities of asbestos, used while restyling the exhibition spaces in the 1960s and 1970s, had to be removed. In addition, the museum’s reopening was delayed by the project’s phased financing. In total, the renovation and construction work took eleven years – half of my museum career. During this period, much of the collection was housed in an internal museum depot and an external storage facility with a restoration studio, half an hour’s drive from Antwerp. The staff were relocated to a government office building near Antwerp Central Station, and the museum’s organizational structure metamorphosed into a more autonomous entity. Fortunately, the public was able to admire a significant number of the KMSKA’s Old Masters in the Golden Cabinet, hosted by the Rockoxhuis from 2013 to 2017. Meanwhile, many of our other masterpieces traveled the world. 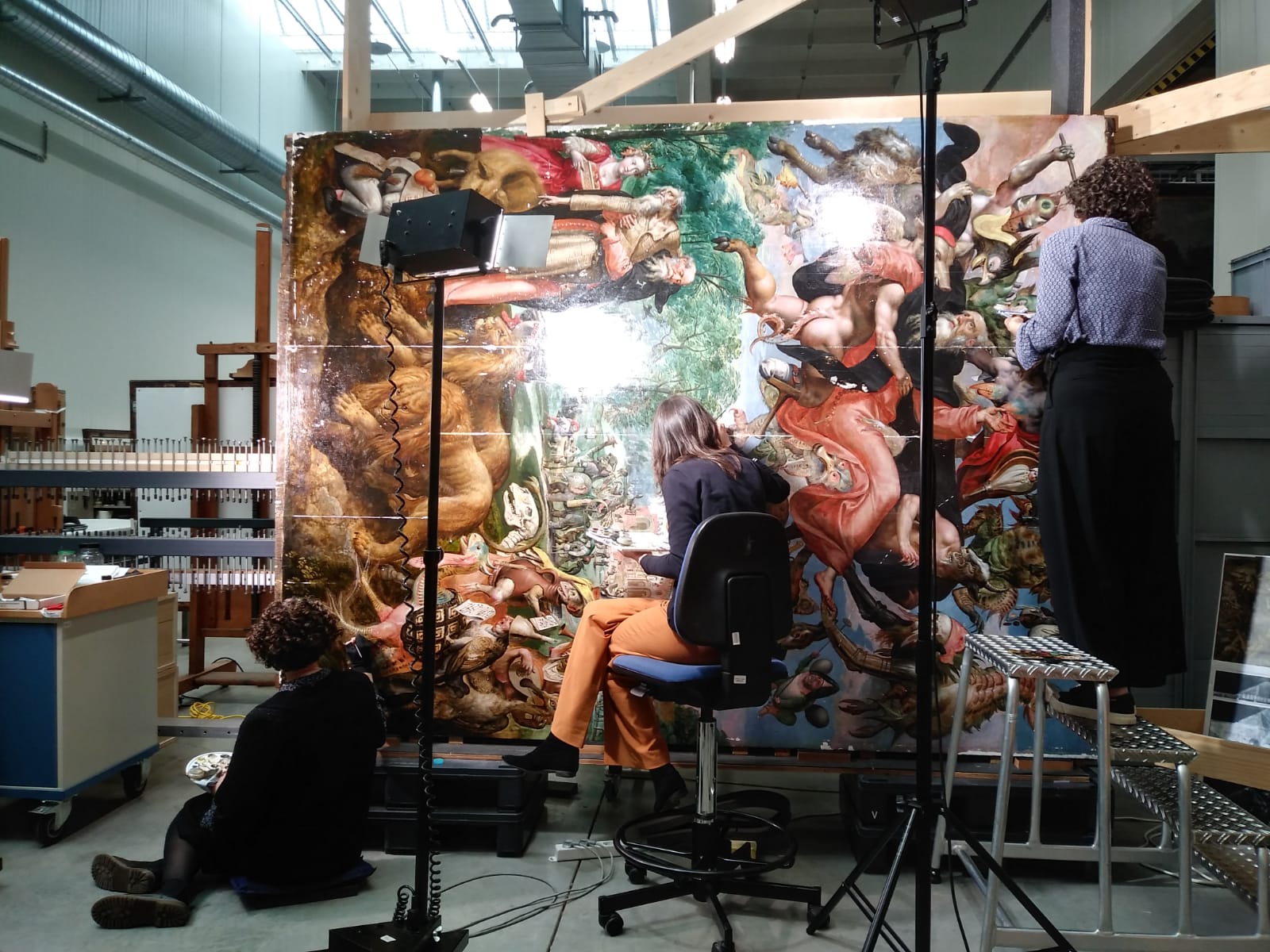 Happily, these efforts have proved worthwhile in every way. The new KMSKA displays two separate worlds. The historical building has been restored to its former glory. A grand exhibition room that was converted into a storage and restoration studio in the 1960s is now once again open to the public. The ceilings of the central rooms, which contain altarpieces by Rubens and Van Dyck, have been gilded in accordance with the original design. A new freight elevator has been installed, making it possible to move even the largest of objects from one floor to another. KMSKA’s historical building mainly contains paintings and sculptures by Old Masters that breathe naturalism and ideal beauty: works that tell stories about gods, rulers, people, and nature. They display the strivings of artists to connect heaven and earth, and were intended to be hung in churches, palaces, halls, or private homes. In contrast, the twenty-first-century white cube style museum building by KAAN architects stands in the former blind-walled courtyards of the old museum. It is invisible from the outside and takes visitors completely by surprise. With this innovation, KMSKA has gained some 40% more exhibition space. This means it is no longer necessary to take down and store parts of the permanent exhibition in order to make room for a temporary show. There is a print room on the mezzanine floor.

The new rooms mainly display expressive, abstract or conceptual works by modern artists. Rather than propagating faith or morality, these artworks are engaged in a quest for artistic essence, resulting from the study of the pictorial means – Light, Color, and Shape. They were largely conceived to be displayed in exhibition spaces, galleries, and museums. Experiments with chiaroscuro by Jacques Jordaens, Breitner, or artists from the group ZERO, and the use of white in a landscape by Jan Brueghel the Younger or Jean Brusselmans, are shown next to each other, independent of the subject.

The KMSKA’s curatorial and audience mediation teams decided to abandon the chronological approach and group its paintings and sculptures thematically. We believe that this accessible subject matter will stir the interest of relatively young, diverse audiences more than art-historical labels such as Gothic, Renaissance, or Classicism. Another advantage is that this mode of presentation enables the museum to fill all its galleries with art of the highest quality and to deal with its weak eighteenth-century holdings in an elegant way. The presentation also respects the function of each artwork. We do not exhibit altarpieces and portraits next to one another, since they were created for entirely different contexts. Preliminary bozzetti and modelli are shown separately from finished works of art. The museum aims to present Flemish art in an international context and to exhibit more work by women artists. Twenty accessible themes offer a useful guide for visitors who come to the museum without any prior knowledge. The room devoted to “Amusement,” for example, illuminates leisure activities and the class-ridden society of the past. The room of “Evil” shows how devils embody human fears. The gallery’s major works will remain in permanent locations, enabling regular visitor to find them without any trouble. However, KMSKA is firmly committed to collection mobility and plans to have a dynamic arrangement. Loans from other institutions and private collections will engage in dialogue with our own works on a temporary basis. Interactive screens with in-depth explanations, an “experience room,” and a route with playful, high-quality interventions by a contemporary designer will give each museum visit added value. 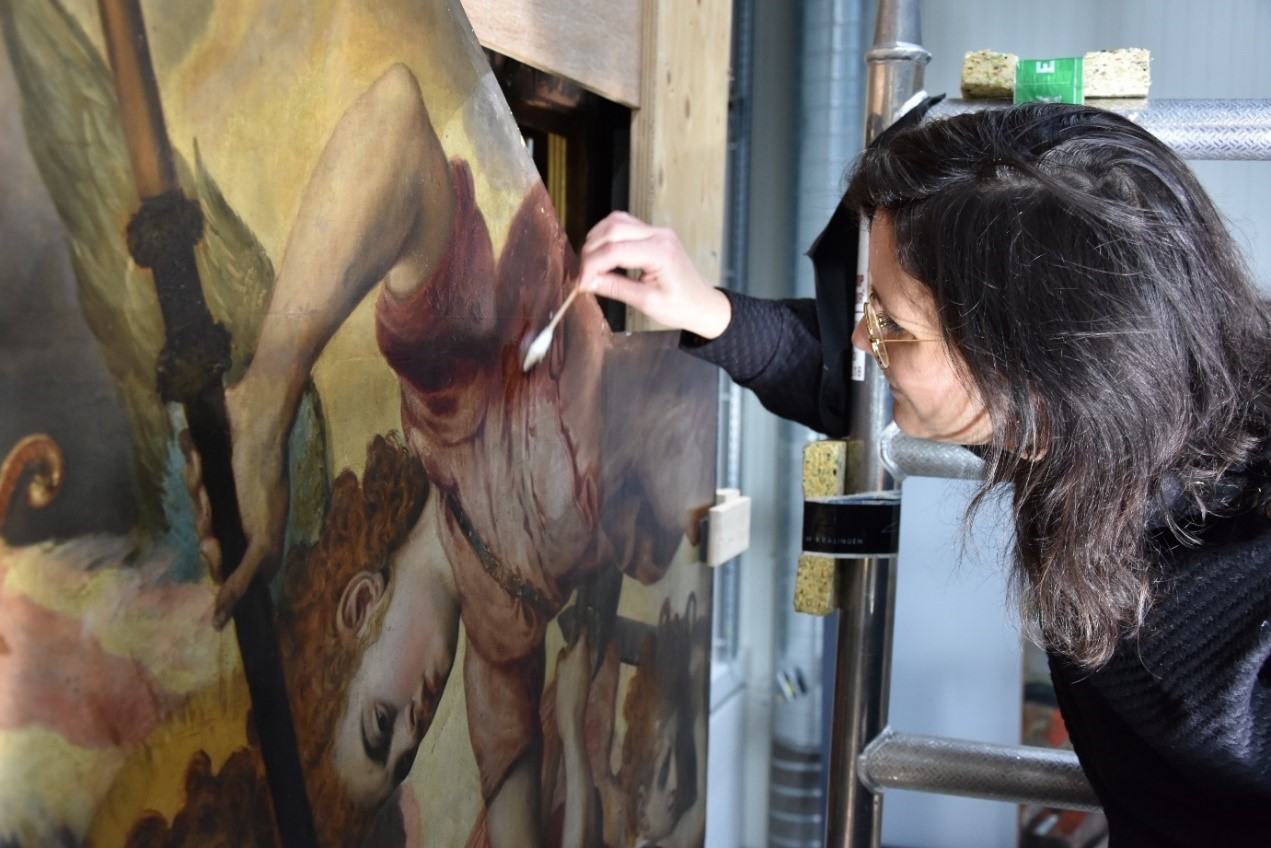 It may come as a surprise that KMSKA has no acquisition budget of its own. However, thanks to the help of the government, several artworks have been procured for the museum in recent decades. The exquisitely painted Old Man in a Tavern by Adriaen Brouwer was bought to strengthen the artist’s presence in the museum collection with a mature work, while the Study Head of an Old Man was acquired to illustrate Anthony van Dyck’s activity in Rubens’s studio. More recently, the Topstukkenraad (the Flemish Council for Artistic Heritage) was able to purchase the earliest abstract Belgian painting for the museum, a work by Jules Schmalzigaug. 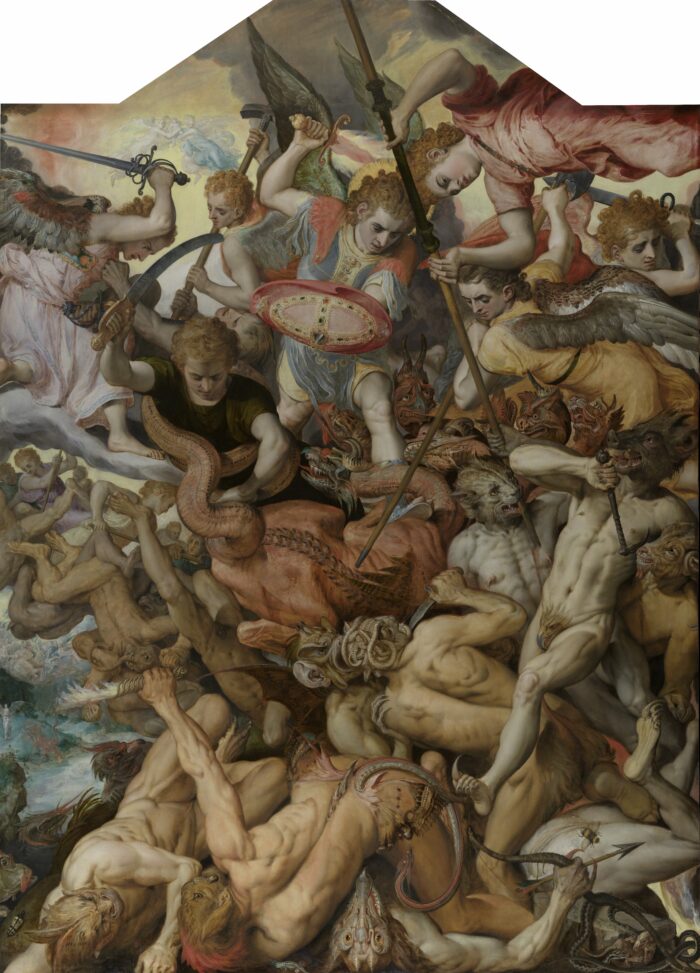 The museum has focused far more on restoration than on acquisition. Over the past ten years, more than a hundred artworks have received restoration treatment in our high-performance conservation studio. Yellowed varnishes had rendered many of the museum’s masterpieces impenetrable and uninviting. The restoration list included Hans Memling’s altarpiece for Nájera, Quinten Metsys’s altarpiece for the Antwerp joiners’ guild, and Frans Floris’s Fall of the Rebel Angels – listed in the CODART Canon! In addition, most of the smaller paintings by Rubens, Van Dyck, Jordaens, and Ensor were cleaned. In the sculpture section, four impressive baroque marble busts were restored. The results of all these treatments are truly spectacular. For far too long we have been looking at the collection as though through dirty glasses! Thanks to the Flemish government and sponsorship by the Baillet Latour Foundation, the National Lottery, and several private donors, KMSKA’s collection will once again be shown to the public in the best possible condition. Other masterpieces have been treated in the conservation studios of the Getty Museum, the Kunsthistorisches Museum, the Mauritshuis, The Metropolitan Museum of Art, the Worcester Art Museum and The Indianapolis Museum of Art. KMSKA is deeply grateful for this international support.

An entire generation will now have its first opportunity to discover the treasures of the largest museum in Flanders, so expectations run very high. KMSKA is looking forward to welcoming you from this autumn onwards. The reopening is scheduled to take place on 24 September!

Nico Van Hout is Head of Collection Research and Curator of Seventeenth Century Paintings at the Koninklijk Museum voor Schone Kunsten in Antwerp. He has been a member of CODART since 2004.