The Barber Institute of Fine Arts

I studied History at Durham University and completed an M. Litt. in Gallery Studies at St Andrews University. In between, I worked for a year as a Research Assistant to Dr Andrew Moore at the Castle Museum in Norwich, my native city, on his pioneering exhibition, Dutch and Flemish Paintings in Norfolk (1988). More recently, Andrew and I happily collaborated on an exhibition catalogue essay investigating the artist of the great Paston Treasures painting in Norwich (2018), also the subject of my first publication in 1991. The earlier exhibition was where my passion for – and education about – Dutch and Flemish art began, and it also sparked an interest in the history of taste and collecting in Britain. My dissertation at St Andrews examined the vast picture collection at Newbattle Abbey, near Edinburgh, formed over a 300-year period by the Earls and Marquesses of Lothian, which included several fine Dutch and Flemish works. In about 1633, one of the family members, Sir Robert Kerr, later 1st Earl of Ancram, brought to King Charles I the first Rembrandts to leave the Dutch Republic. 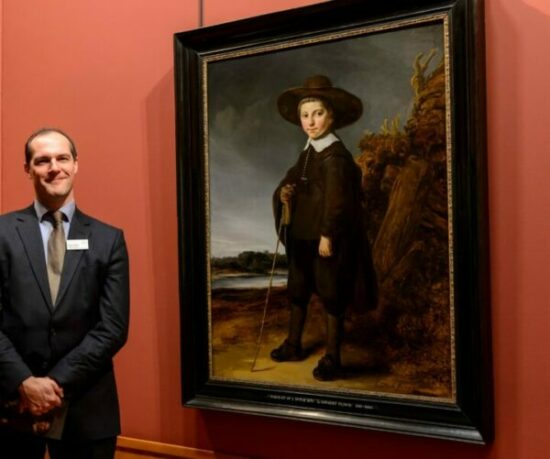 In 1991, I was fortunate to join the curatorial team at the Wallace Collection, London, home to one of the finest collections of Dutch and Flemish old masters in the UK. There I began by assisting the Director, the late John Ingamells, in the completion of his catalogue of this part of that extraordinary treasure house of masterpieces. During my twelve years at the Wallace, I came to focus on the neglected subject of French bronze sculpture, and founded the international French Bronze Study Group with Sir Jonathan Marsden, then at the Royal Collection. This rapidly developed into a group of well over one hundred collectors, dealers and conservators as well as academics and curators from around the world, and its studies culminated in a landmark exhibition, Cast in Bronze, at the Louvre, Met and Getty in 2008/09. In a catalogue essay, I combined my academic interests by drawing out the formal connections between figural depictions in French sculpture and Dutch fijnschilder painting of around 1700, with their shared sources in antique sculpture, contemporary theatre and dance and manuals of correct deportment.

I returned to Dutch and Flemish painting when moving to Glasgow Museums in 2003 as the Curator of European Art, 1600-1800. I published articles in Apollo magazine on the Dutch and Flemish pictures in both the Burrell Collection and its sister institution, the great Kelvingrove Art Gallery and Museum. Each boasts a fine painting by Rembrandt among its treasures, in a city particularly rich in Dutch and Flemish works thanks mostly to the wealth, tastes and benefactions of its 19th-century merchant collectors. I provided brief entries for more than 250 works for the VADS NIRP database of UK collections, and fully explored the fascinating de Lairesse Allegory at Kelvingrove, a much more recent acquisition, in an article in the Winter 2020 issue of the online JHNA. 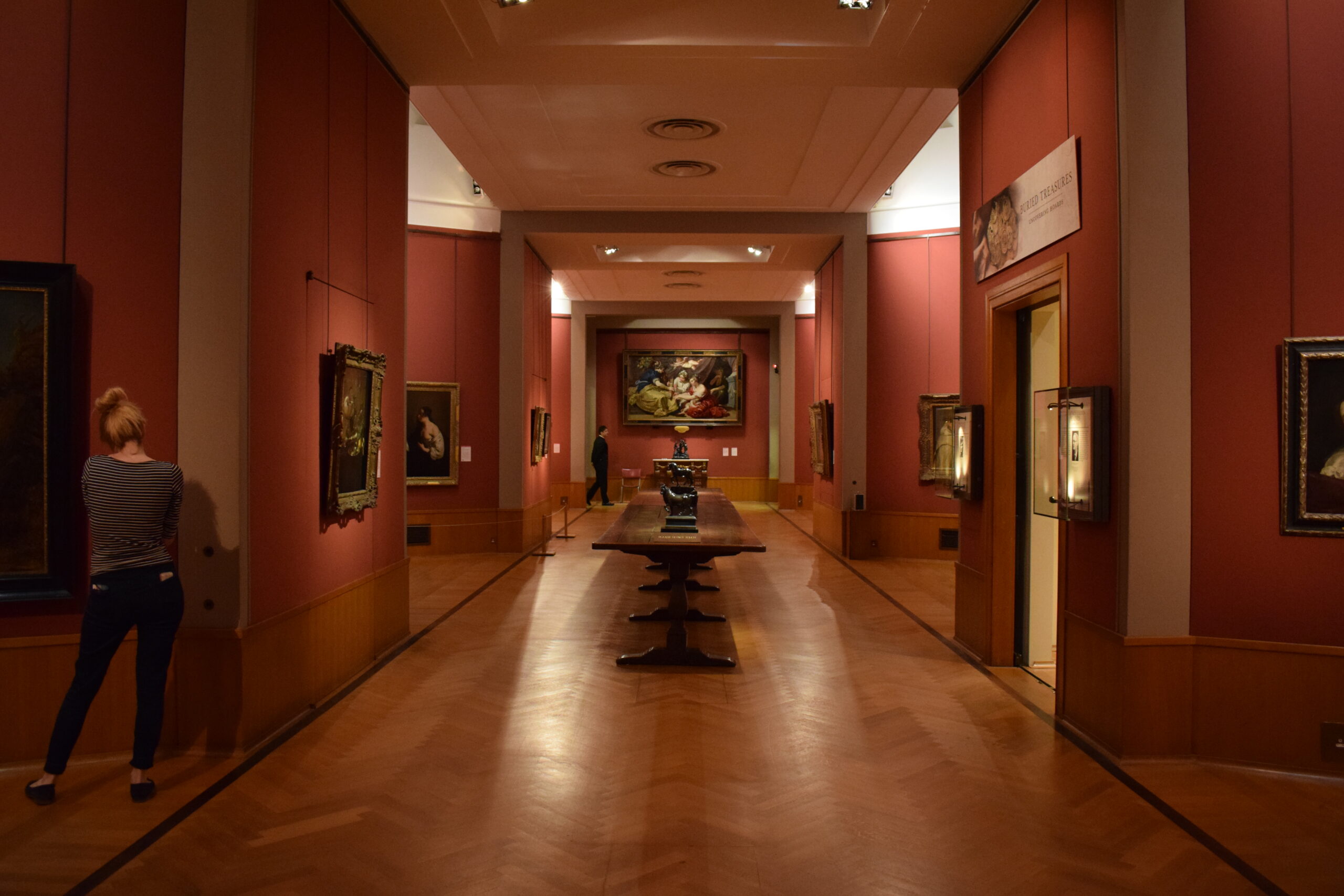 The seventeenth century gallery at the Barber Institute

I have been Head of Collections and Deputy Director at the Barber Institute of Fine Arts at the University of Birmingham since 2010. The Wallace, Burrell and Kelvingrove collections were all wholly or largely formed by the gifts or bequests of private individuals. In contrast, the Barber’s numerically modest but qualitatively impressive holdings have been methodically acquired, since 1936, on the judicious advice of a succession of art-historian directors. Founded in 1932 by Hattie, Lady Barber, the heir to her husband, Sir Henry’s property fortune, the primary mission of the Institute is the ‘study and encouragement of art and music’ (the fine Art Deco gallery building also houses a superb 350-seat concert hall). While Lady Barber acquired no fine art of note, being more interested in music, textiles, horses and gardening, the Institute named in her husband’s honour now contains more than 150 old master and modern paintings, and about 350 drawings and 400 prints across 700 years of the European tradition, as well as some 60 sculptures. These were all acquired and are owned by the Henry Barber Trust, established alongside the Institute to manage the funds from Lady Barber that underpin it. 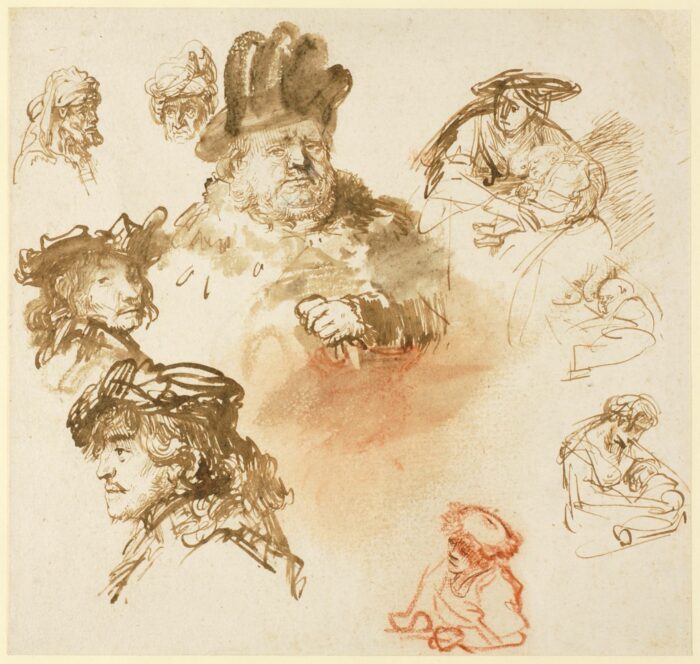 Among the Barber’s holdings are more than thirty Dutch or Flemish pictures, and some high-quality drawings by Rembrandt and his circle, Van Dyck and others. Particularly notable among the paintings are fine works by Jan de Beer, Jan Gossart, Frans Hals, Matthias Stom, Govert Flinck, Jan Davidsz de Heem, Antony van Dyck, Peter Paul Rubens, Jan Steen, Aelbert Cuyp and Salomon van Ruysdael. Several of these have featured in our well-established series of ‘object-in-focus’ loan exhibitions, held each autumn. I have curated three of these in recent years, on Flinck’s Portrait of a Boy (2015), Steen’s The Wrath of Ahasuerus (2017) and De Beer’s double-sided Nativity/ Joseph and the Suitors (2019). In each case, in the planning and for the accompanying publication, I have had the pleasure and benefit of working in partnership with other scholars, some very young, some very distinguished, most of whom were then or now are part of the CODART network.

Jan Steen’s painting is a particular favourite of mine, and one I had eyed up from my first day at the Barber as a promising subject for an exhibition. Although his history paintings have often been disparaged, all of Steen’s trademark skills are on full show in this remarkable work. The table carpet, banquet vessels and costumes of the principal figures are beautifully described, there is humour, drama and a compelling narrative. Even the criticism made by historical commentators that Steen’s operatic approach to sacred subjects was disrespectful falls away one when one understands the artist’s intentions. Steen is not attempting an archeologically correct depiction of the protagonists but rather evokes contemporary actors playing these biblical characters on the stage, as was fashionable at the time. 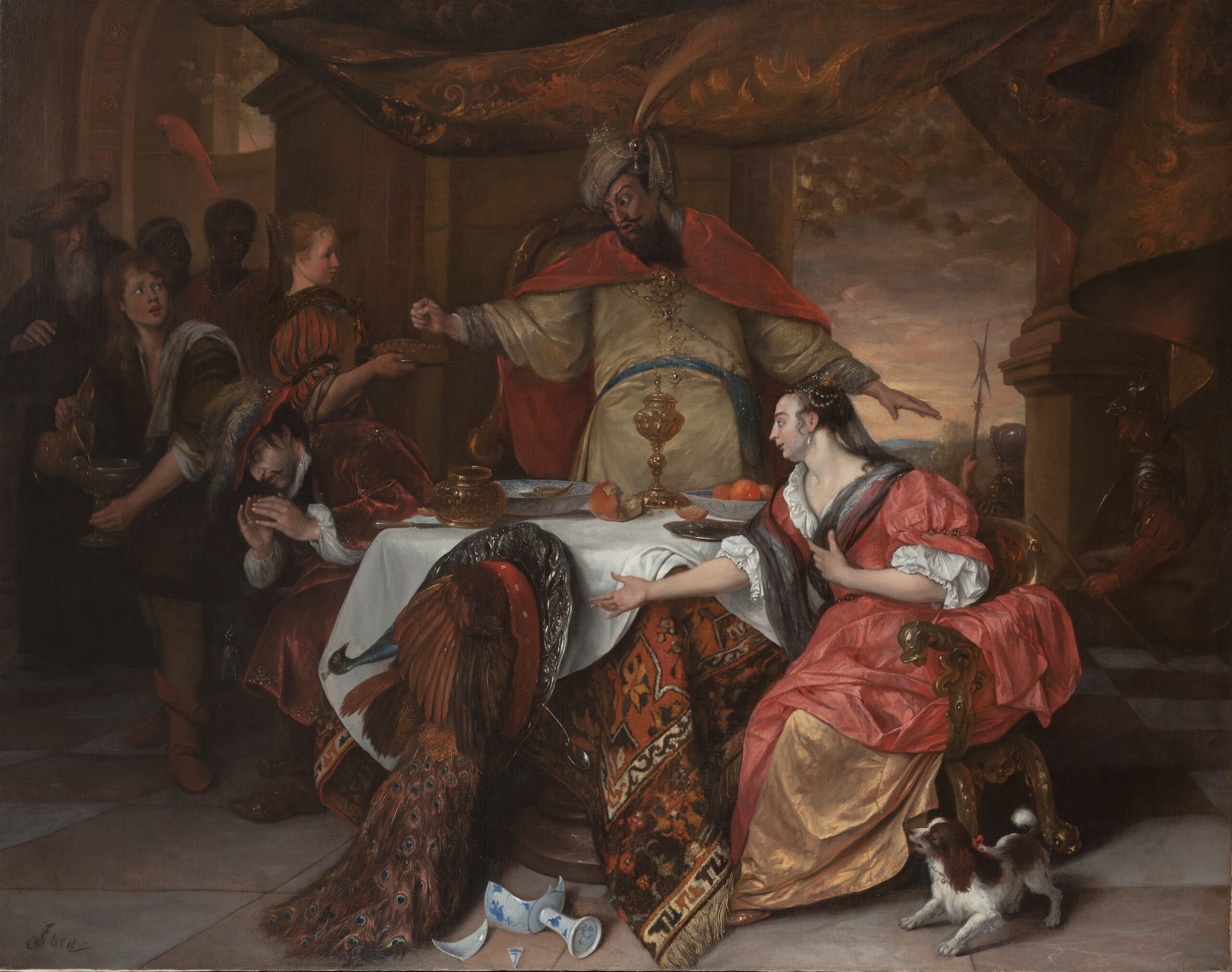 Besides curating exhibitions and publishing on paintings and sculpture at the Barber, a university-based collection, I also engage in some teaching, in particular to our Art History and Curating MA students. I supervise and edit their annual exhibition at the Barber, which is currently a collaboration with Royal Collection Trust. All being well, next year’s show, which the students will help select, will consist of Dutch and Flemish old master drawings from the Royal Library at Windsor Castle. This will be the first time that a large group of these works will have been shown together for a generation, and I am naturally thrilled at the prospect. More generally, the opportunity to work with students and academics from a variety of disciplines is one of the great attractions of a university museum job. 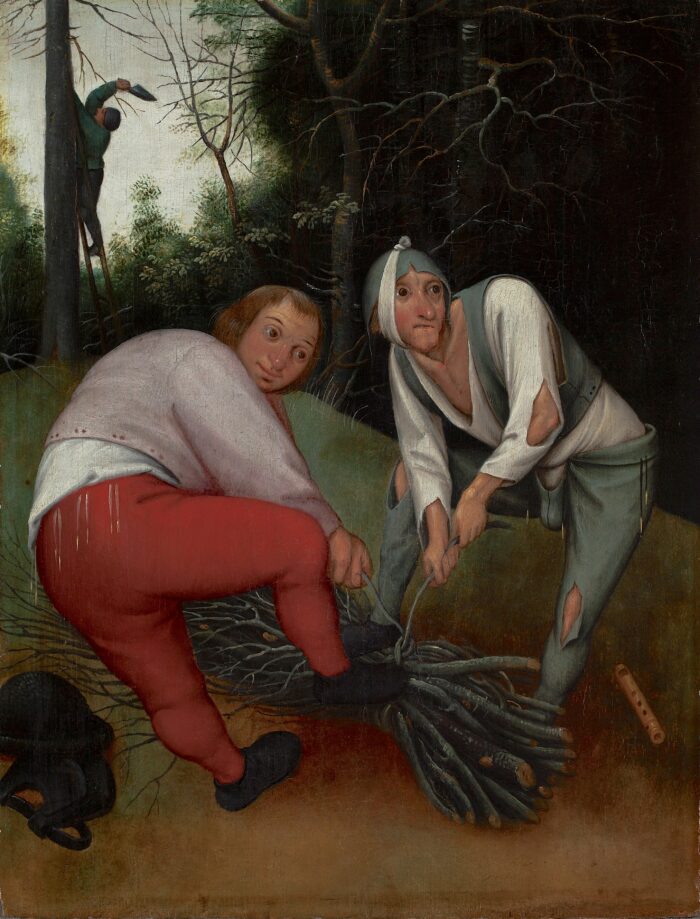 Further ahead, in 2022, I am also planning an in-focus show around our intriguing Pieter Brueghel the Younger painting of Two Peasants binding Faggots, looking at it in the context of his representations of Netherlandish Proverbs. Although there is today a serious lack of teaching of Dutch and Flemish art in English universities, despite the riches of our private and historic collections in this area, it is to be hoped that the Barber’s exhibitions, publications and associated public programming will help promote a wider interest in this artistic tradition. Acquisitions also help: the Barber, thanks to the munificent support of the Henry Barber Trust, continues to be active on the art market, always seeking to enhance its collections. In addition, we have benefited several times from the UK Government’s Acceptance in Lieu scheme, most recently by the allocation to us of Salomon van Ruysdael’s magical Landscape with Cavalry from an historic Welsh family collection. This is the subject of my latest article, published this month in the Festschrift for Dr Fred Meijer.

CODART has played a critical role in my professional life since I joined in 2003. I have attended, and spoken at, several memorable congresses, met numerous wonderful colleagues from around the world, and always found it to be an excellent, supportive community whenever I have called on it for help or advice. Curators from all stages of their professional journeys are admitted and represented, so everyone feels welcome and valued. In these difficult times, such support networks become even more valuable. I sincerely hope that I am the last, as well as the first, ‘curator in the spotlight’ to contribute to this series during the global Covid-19 pandemic.

Robert Wenley is Head of Collections and Deputy Director at the Barber Institute of Fine Arts in Birmingham, UK. He has been a member of CODART since 2003.