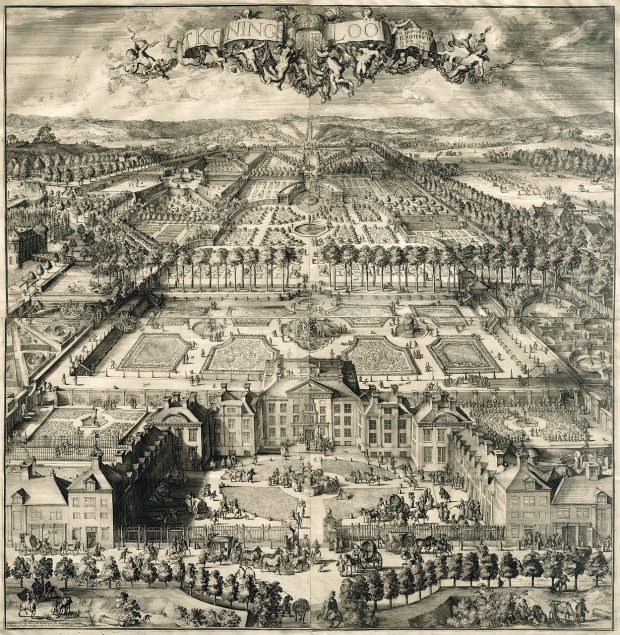 In 1684 Stadholder Willem III bought the modest castle, Het Oude Loo (The Old Loo), along with its park (approximately 200 hectare) and an interest in the 3000 hectare-large forest at Hoog Soeren for 900,000 Carolus guilders. The following year, 1685, he commissioned the construction of a new, grand hunting lodge in which he could accommodate his entourage, the later Paleis Het Loo (Het Loo Palace). Willem III also wanted to lay out a French garden that could vie with the ones at Versailles; the design for the palatial garden therefore had to be grand, spectacular even. The Stadholder used the forest and moors as his hunting grounds. Painters like Gerard de Lairesse and Melchior d’Hondecoeter provided the original decoration of Het Loo. The palace subsequently served as the residence of various generations of Oranges up until 1975: the last resident was Princess Margriet. Its interior changed in the course of centuries. The lion’s share of Willem III’s art collection was auctioned off in 1713.

A reinstallation of the palace took as its point of departure the 17th-century apartments of the first residents, King-Stadholder Willem III and Queen Mary II. They are part of a chronological series of rooms devoted to the various Oranges who lived at Het Loo after them. The rooms contain furniture, objects and painting with which various Orange generations surrounded themselves. 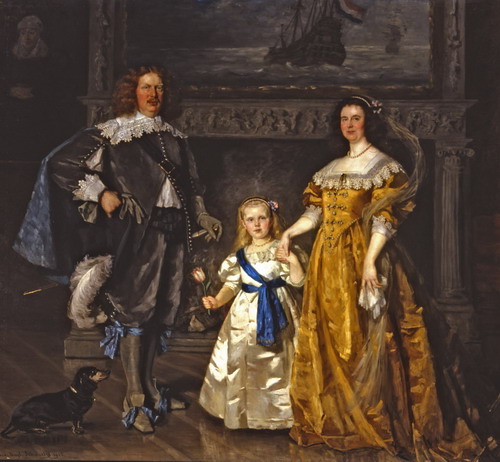 Although Enschede existed already in the early Middle Ages as a modest agrarian settlement along the road leading from Deventer to Münster and Osnabrück, the town only truly flowered during the Industrial Revolution, when the textile industry ensured its rapid expansion. Enschede’s population quintupled between 1870 and 1900! While many of the textile factories have been razed in the meantime, traces of its industrial past can still be found in the city. As of the 1960s the industrial bustle has been somewhat backgrounded and Enschede now profiles itself as a knowledge and innovation city. Its most important exponent, Enschede University, opened in 1961. 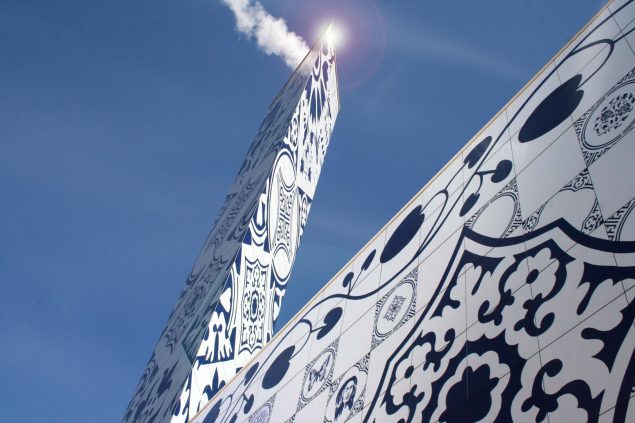 On 13 May 2000 disaster struck the district adjoining the Rijksmuseum Twenthe: the warehouse of a firework importer caught fire, causing a chain reaction of explosions. The entire Roombeek district right next to the museum was demolished and 23 people died. Approximately 80% of the district has now been rebuilt. A great deal of interesting buildings by contemporary architects can be seen in this renovated area.

Another very interesting modern building is the Muziekkwartier, opened in 2008 and housing several musical intitutions, such as a concert hall, a musical school and a pop music stage. This unique cultural building will be the location of our congress diner.

The Rijksmuseum Twenthe owes its existence to the Van Heek family, which acquired its wealth in the textile industry. Jan Bernard van Heek (1863-1923) in particular worked hard for the museum. After his death the family took over the baton and in 1930 the museum was opened and transferred to the Dutch state: Jan Herman van Heek (1873-1957) was its first director. At the time, the collection comprised approximately 140 works, primarily paintings from the Middle Ages to the 19th century. In the course of the last century, the collection grew substantially and currently encompasses approximately 8000 objects from the 13th century to the present. Private benefactors were instrumental in this expansion. In the 1960s the 17th and 19th-century paintings owned by the textile manufacturers J.B. Scholten and M.G. van Heel were accommodated in the museum. The Van Heel collection also included several hundred pieces of 17th and 18th-century Delft earthenware.

The museum also began collecting 18th-century fine and applied art in the 1990s. An important acquisition in this respect was Mr. J.M. van Kempen’s bequest of hundreds of prints, drawings, pamphlets and books. Recently the museum received the Martens-Mulder-Stichting’s collection of 17th and 18th-century silver on permanent loan. 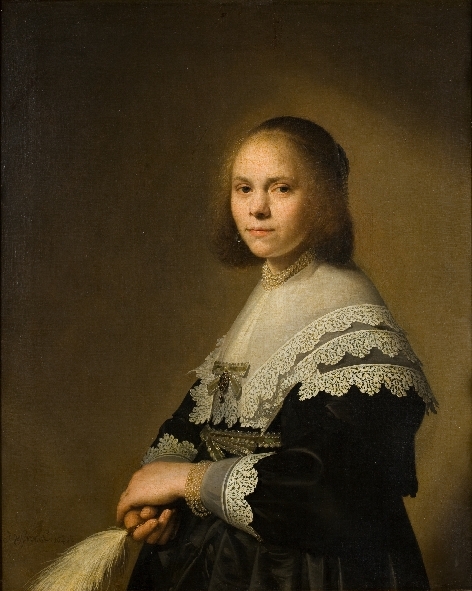 As for the 19th and 20th century, Karel Levisson’s gift of hundreds of drawings and prints proved invaluable. The most extensive expansion of the museum’s collection was in the area of modern art as of 1965, with the recent arrival of the VBVR’s storage collection – approximately 1000 works by nationally and internationally leading artists from this period.

Several of the highlights can be admired online.

Karel Muller and Anton Beudt designed the building as a museum, with the aim of “providing visitors in our eventful and hectic times a moment of rest and repose and a look back into the past.” The building’s shape – a closed complex around a courtyard – corresponds nicely with this concept. The building was altered several times in the course of the 20th century, most recently by Ben van Berkel (architect of the Erasmus Bridge in Rotterdam, and Museum Het Valkhof in Nijmegen), who added a new exhibition gallery and a museum cafe.

During the CODART congress the Rijksmuseum Twenthe is presenting the first survey ever of Nicolaas Verkolje (1673-1746), with approximately 30 of his most important history paintings and portraits, and dozens of drawings and prints, many on loan from foreign collections. Nicolaas Verkolje was the son of the portrait painter Jan Verkolje and one of the most interesting artists of his time. Verkolje sometimes made several versions of the same theme, which can be compared in the show. This is the case, for example, for one of the highlights in his oeuvre, The finding of Moses from the Rijksmuseum Twenthe, which is exhibited alongside works with the same scene from the Landesmuseum Mainz and the Thyssen-Bornemisza collection in Lugano. 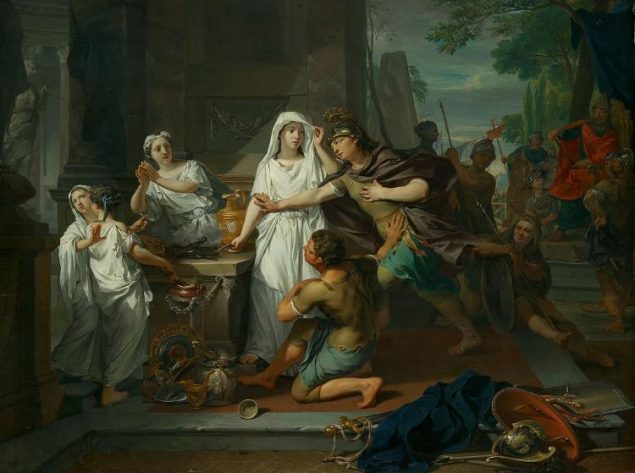 Participants will be able to visit the collection of the museum and the Verkolje exhibition during the free visit on Monday 20 March, and also during the excursion for an in-depth look at the exhibition as well as a visit to the Restoration studio, if they so choose. 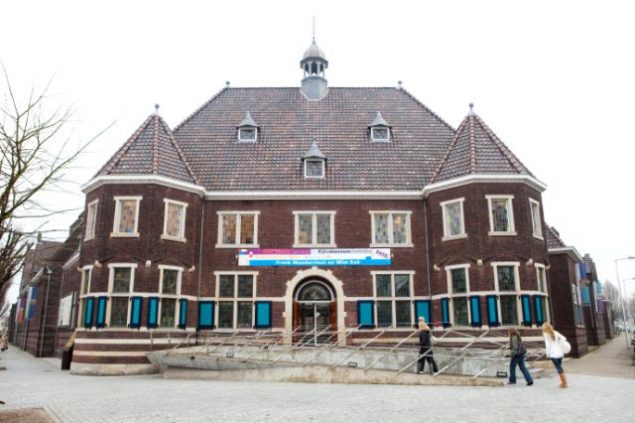 Kasteel Twickel (Twickel Castle), near Delden, has been nestled in the middle of a beautiful estate extending over five parishes for close to seven centuries. Located in the east of the Netherlands near the German border, the estate covers more than 4000 hectares and includes 150 farms with agricultural land and meadows, interspersed with moorland, fens and woods. The oak woods have long been famous, not just because of their beauty, but also the quality of the wood they produce. The characteristic farms can be recognized by their black-and-white shutters and the scattered water towers and saw mills. 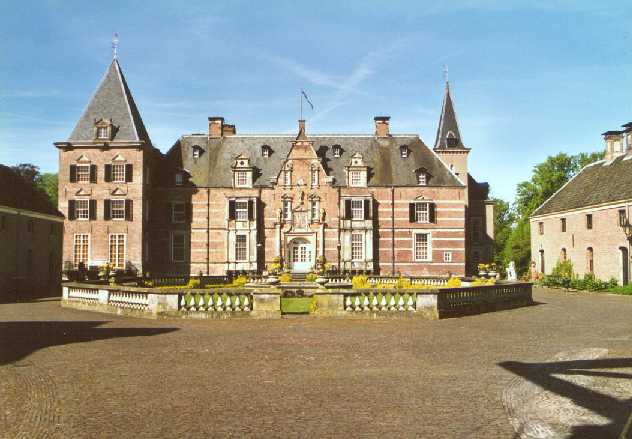 Between 1347 and 1953, Twickel remained in the possession of successive members of the same family: Van Twickelo, Van Raesfelt, Van Wassenaer Obdam and Van Heeckeren van Wassenaer, due to the fact that it could always passed on through the female line. In 1953, Baroness Van Heeckeren van Wassenaer-Countess of Aldenburg Bentinck turned over the entire estate to the Twickel Foundation. After her death in 1975, her other possessions, including estates in Germany and the provinces of Gelderland and Zuid-Holland in the Netherlands (approximately 2000 hectares), also entered the Foundation. When she set up the Foundation, Baroness Van Heeckeren stipulated that the castle should remain inhabited. Accordingly, her second cousin, Chr. Count Zu Castell and his family presently reside there. The castle is not usually open to visitors, but its collection, archives and library will graciously be made available to CODART.
The art collection and the extensive library were built up by the van Wassenaer family and includes spectacular portraits of family members..

Along a bend in the Dinkel River, in a beautiful natural setting, Huis Singraven (Singraven Manor) rises up at the end of a stately drive. The estate was first mentioned in 1381, and construction of the first house began in 1415. In the course of the centuries it has belonged to a variety of illustrious and noble families. In 1505 Singraven was exempted from certain taxes and placed at the disposal of the Oldenzaal beguines for ten years. Subsequently it was inhabited by the counts of Bentheim, among others, and noble families such as Sloet and De Thouars. The estate has since then been expanded with the surrounding Borgbos and Sterrebos. The final inhabitant, Willem Frederik Jan Laan (1891-1966), who never married, gave the estate to the Stichting Edwina van Heek in 1966. This foundation still owns the manor, the watermill and seven leaseholds. Its charter requires the estate to be kept in its current state. 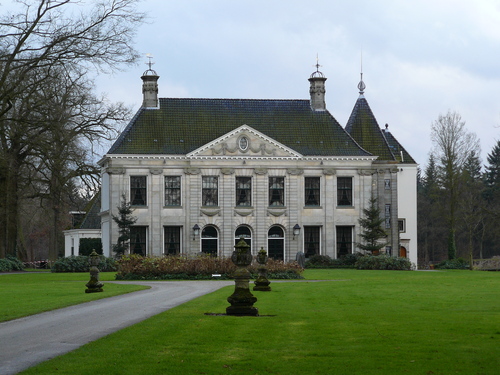 Laan left his mark on the present appearance of the manor. The former manorial farm derives its cultural-historical value particularly from the neo-classical façade and impressive interior he had built. Laan also laid the foundations for the magnificent Arboretum and the Park around Singraven Manor. He turned the manor into the “house of his dream of a life of elegance.” The superb period rooms display the unique personal collection of furniture, paintings, silver, porcelain and tapestries assembled so lovingly and knowledgably by Laan. Remarkably, the aristocratic yet cozy interior has hardly changed since Laan’s death: it is almost as if the gentleman could walk right in. The main hall at Huis Singraven is done in a Louis XV and Louis XVI style. The art collection contains work by renowned names such as Melchior d’ Hondecoeter, Jan Davidsz de Heem, Abraham Storck.

Kasteel Het Nijenhuis (Het Nijenhuis Castle) is one of the best-preserved manorial farms in Overijssel. Located between the villages of Heino and Wijhe it is surrounded by beautiful scenery. The history of the castle begins in the late Middle Ages and it is first mentioned in 1382. The castle has been inhabited by various noble families, including Van Ittersum, Bentinck and Von Knobelsdorff. After the Van Pallandt family bought the estate in 1934, it experienced a period of decline. This was reversed when the collector Dirk Hannema convinced the provincial authorities of Overijssel that Het Nijenhuis had to be rescued from further decay. Under his initiative the castle was restored and the side buildings converted into a museum, with Hannema’s collection as the point of departure. The founder of Museum de Fundatie lived in Het Nijenhuis from 1958 until his death in 1984. In 2003-2004 the castle was thoroughly renovated under the architect Gunnar Daan. The house, which previously could be visited by appointment only, was entirely reinstalled and has been open to the public since September 2004. 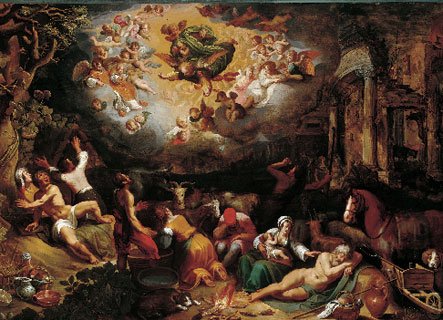 Hannema’s varied collection includes paintings, drawings, sculptures and applied art from many periods and cultures. Until his death in 1984 he organized exhibitions and guided interested parties around his home and museum. Museum de Fundatie is continuing Hannema’s work and currently exhibits a part of his extensive collection in the castle. In addition, temporary exhibitions are regularly held in the castle and sculpture garden. The CODART excursion will focus on the collection of drawings.

Nothing is known about the early history of Kasteel Huis Bergh (Bergh Castle). It is believed that a mound was raised on a little island in a swamp around 1100 on which was built a so-called motte-and-bailey: a wooden tower. Around 1200 this wooden tower, or donjon, was replaced by a round tower made of tuff. The remains of this tower can still be seen in the wall to the left of the present main entrance to the great hall. It is likely that sometime around 1300 the occupants wanted greater comfort and so built the first floor. The main castle building was enlarged in the years that followed. Bergh Castle suffered serious damage at the start of the Eighty Years’ War. In 1735 the main castle building burned to the ground, and was yet again ravaged by fire in 1939. The local population was instrumental in saving an important part of the art and furniture. 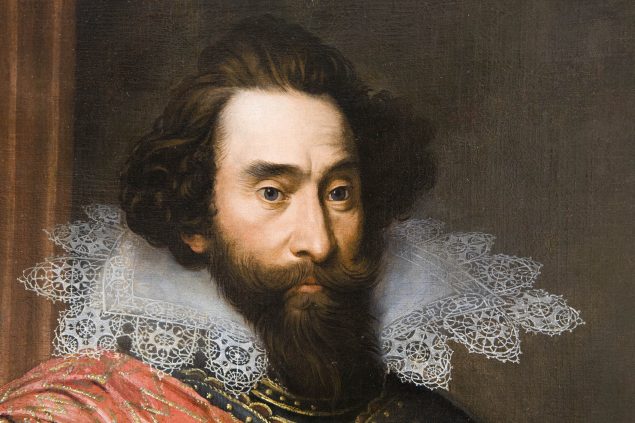 The industrialist Jan Herman van Heek (1873-1957), who acquired the castle, its rights and possessions from Prince Wilhelm in 1912, immediately began restoring it. The work was finished in 1941, and in 1946 Van Heek transferred his ownership to the Bergh Castle Foundation.

For a detailed history of the inhabitants, click here.