This walking tour is dedicated to the history of Warsaw and its architecture in the Socialist Realism style. After the great demolition of Warsaw during the Second World War many gaps throughout the city were rebuilt in the years 1949-1956. This building campaign took place on a monumental scale in a style with a “socialist nature and a nationalist form” – so-called Socialist Realism, corresponding to the Marxist ideas of the Communists. The neighborhood of Muranów was erected on the former Jewish Ghetto, of which every trace had been erased. New houses, schools and other facilities were built to accommodate 30,000 inhabitants in a “workers’ paradise”. Another large urban project emerged around Marszałkowska Street and included a new design for Constitution Square (Plac Konstitucji), named after the Constitution of the Polish People’s Republic of 1952. 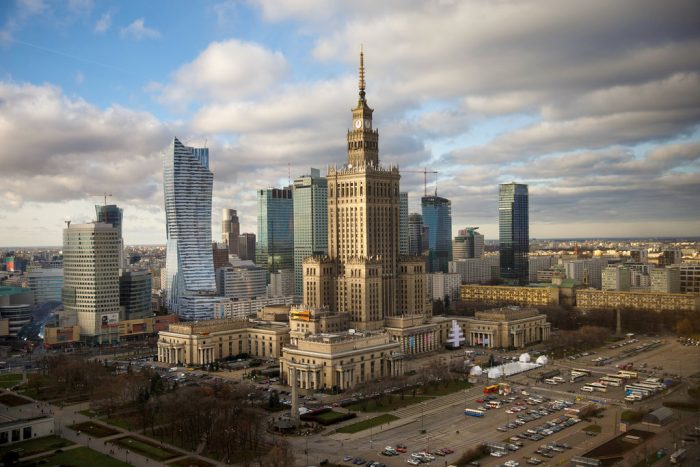 One of the most significant examples of this style is the Palace of Culture and Science (Pałac Kultury i Nauki), constructed between 1952 and 1955 after the design of the Russian architect Lev Rudnev. The idea for the building was initiated by Joseph Stalin himself as a gift from the Soviet Union to the Polish People. The architect not only based his design on examples of Soviet skyscrapers, but also incorporated various stylistic elements from Polish historical buildings that he visited on his travels around the country. With its more than 3,000 rooms, 42 stories and 237 meters of height, the building still dominates the city as the tallest building in Poland. Its terrace on the 30th floor gives a beautiful panoramic view of the city and is one of Warsaw’s major tourist attractions.

This guided city tour is dedicated to the Jewish history of Warsaw, focusing both on the past and present. Until the Second World War, Warsaw was the city with the largest Jewish community in Europe. Jewish cultural life flourished and hundreds of artists, actors, writers, and journalists called the city home. The Second World War and the Holocaust, however, changed the city forever. The concentration of Jewish inhabitants in the Warsaw Ghetto under shocking conditions, the deportations to extermination camps, and the gruesome events of the Warsaw Uprising of 1943 are estimated to have taken the lives of at least 300,000 Jews. Realizing what Warsaw was like before the War, helps us to understand the tremendous loss. The wounds and scars will never heal. But there are also stories of the present; stories of rebirth. 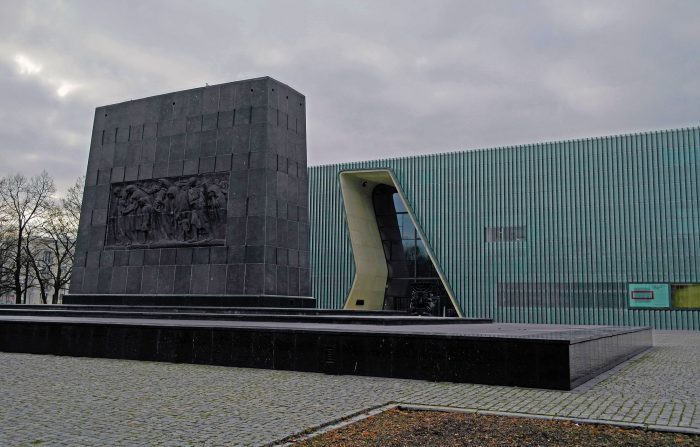 Monument to the Ghetto Heroes and Polin: Museum of the History of Polish Jews, Warsaw

The walk around Jewish Warsaw provides an opportunity to discover the traces of the past and the revival of the Jewish heritage in the modern city. The tour will include the former area of the Warsaw Ghetto, the Monument to the Ghetto Heroes, the Umschlagplatz where the Jewish inhabitants were assembled before deportation, and the exterior of the impressive building of the Museum of the History of Polish Jews (Polin), which was built in the heart of Jewish Warsaw and completed in 2013.