The attributions of many of the Dutch and Flemish paintings that entered the Saratov State Art Museum (named after A.N. Radishev) were changed following additional research. Yet even now there are still doubts concerning the attribution of paintings by Cornelis Huysmans, David Teniers II (studio of), and the dates of works by Matthias Stom, Johannes Lingelbach, and Simon Johannes van Douw. A specific example of key attribution issues and dating are two works by Gaspar Peeter Verbruggen the Younger in our collection.

Verbruggen the Younger’s artistic legacy is enormous. Many floral still lifes from the late 17th century through the early 18th century are attributed to him. Flora, a signed and 1695 dated painting by him in our museum, reveals the master’s pictorial manner at its best. It initially came from the Volkov Estate (in Smolensk Province). In the 1923 inventory of the Radishev Museum it is attributed to three painters. Upon further research, however, we identified only one other hand in the painting aside from Verbruggen the Younger, and established that Pieter Ykens (1648-1696) was responsible for the figures.

Additional research also made it possible to attribute a second painting, a Still life, to Verbruggen the Younger. The museum inventory gives it to an unknown European master. Clearly, the painting must be dated to the early 18th century, more specifically the 1710s. The pictorial manner of the Still life appears to be simpler in comparison to Flora, suggesting that the master was past his creative peak and had resorted to producing mainstream works for the market. 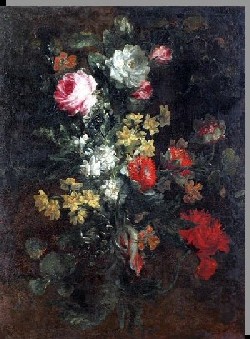 I would welcome discussing our paintings with experts and interested colleagues knowledgeable about the attribution and dating of works to Gaspar Peeter Verbruggen the Younger.

Tatiana Savitskaya is head of the Department of Foreign Art at the Radishchev Art Museum in Saratov. She studies the collection of Northern European art (primarily the Dutch, Flemish and German paintings). Savitskaya wrote the entries on Northern European art for the museum’s catalogue Foreign Art. Painting. Drawing. Sculpture. Tapestries, vol. 2, (2008). She was involved in the exhibition Original, copy, forgery held in 2005, which ensued from the technological research on the collection of foreign painting. Furthermore, she conceived the permanent display of the Dutch and Flemish paintings that was installed when the museum was renovated in 2008.