The images found on works of applied art, for instance ceramics, silverware and textiles, are often discussed only within the context of how they are made. Very little attention is paid to the role of the artists responsible for the designs or their adaptations. Though some art historians do treat the pictorial sources of images on works of decorative art, many applied art specialists seem more interested in production centers, manufacturers and dating the objects. This can be explained by the fact that many of the images on these objects are derived from prints, rather than being precise copies of them.

Scholars have given serious thought only to the designs and designers of European tapestries as they were often woven from special designs. This lacuna is due to the fact that European decorative art from around 1500 to 1800 is hardly taught in departments of art history at Dutch universities, and the absence of cross-pollination between the fine and decorative arts. The situation could be redressed if departments of art history and museums were to reorient their focus! 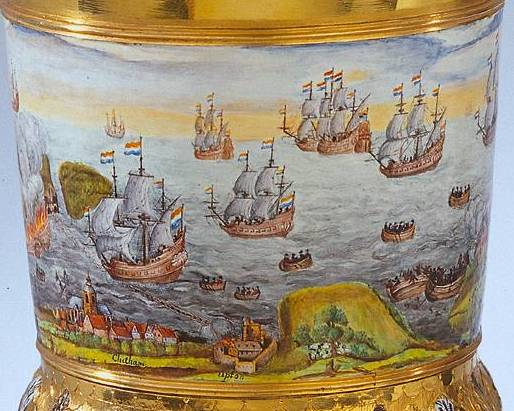 Ebeltje Hartkamp-Jonxis (1944) studied European Art History and Southeast Asian Art at the University of Amsterdam. She began her career as scientific assistant at the Institute of South and Southeast Asian Studies at Amsterdam University. Next, she was a liaison officer for Dutch museums at the Ministry of Culture in Rijswijk (the Netherlands) and a curator of decorative art and design at the State Owned Art Collections (presently the Instituut Collectie Nederland [ICN], or Netherlands Institute for Cultural Heritage) in The Hague. From 1992 to 2009 she was curator of textiles at the Rijksmuseum in Amsterdam. She was on the editorial board of Textielhistorische Bijdragen and is currently a member of the board of trustees of Duivenvoorde Castle, the Netherlands. She has published on Indian export art, Dutch design, the history of Dutch interiors and European tapestries. Books she has either (co-)authored or of which she was the main contributor: Sits: oost-west relaties in textiel (1987), Sitsen uit Indian/Indian chintzes (1996) and European Tapestries in the Rijksmuseum (2004). At present she is investigating the luxury trade between Ceylon and the Netherlands around 1700.