At the Main Market Square you will find the Renaissance building of the Sukiennice or Cloth Hall, with its ground-level arcades full of stalls and shops. The building’s upper floor houses the Department of Nineteenth-Century Polish art of the National Museum in Cracow.

The old Jewish district of Cracow was named after King Kazimierz the Great, who founded the original district in the fourteenth century. It is located south of the old town of Cracow in a bend of the Vistula River. The Jewish community expanded over the centuries until World War II, when part of the population escaped while the rest were murdered. The old town fell into disrepair after the war and it was not until after the end of the Communist period that life returned to Kazimierz. The remaining Jewish community gradually expanded again, and after Steven Spielberg shot his 1993 film Schindler’s List here, Kazimierz became a tourist attraction. Many Jews returned from Israel and the US to make their homes here. Today it is a vibrant area with Plac Nowy as its center, numerous synagogues and Jewish cemeteries, and an abundance of art galleries, antique stores, bars, and restaurants. 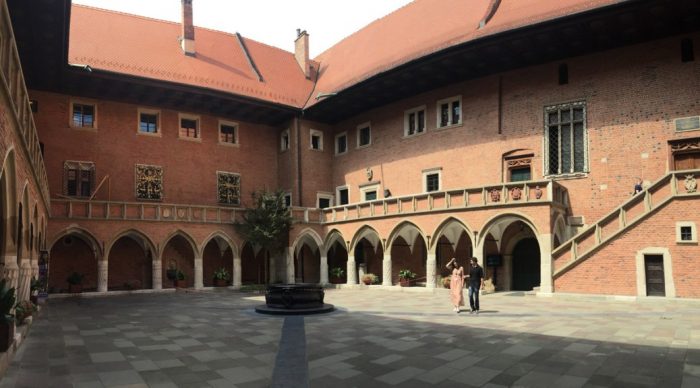 Courtyard of the Collegium Maius, Museum of the Jagiellonian University, Cracow

Museum of the Jagiellonian University

The Museum of the Jagiellonian University occupies premises in the beautiful Collegium Maius, which is one of the oldest university buildings, dating back to the fifteenth century. The brick and limestone building, featuring a courtyard with Gothic arcades, remained largely unchanged for three centuries. In the period 1839 to 1870, however, it was renovated in neo-Gothic style. Shortly after 1940 the building was restored to its pre-1840 state, and the Museum of the Jagiellonian University was opened there in 1947. Its collections primarily include historical, scientific (including astronomical) instruments and other objects related to the university’s history, as well as several paintings from the Low Countries, such as a Venus and Amor by Jan Massijs (1509-1575) and a Portrait of Joost van den Vondel by Philips Koninck (1619-1688).

The historic, seventeenth-century granary that houses the EUROPEUM was rebuilt many times. The building became the property of the National Museum in Cracow after World War II and underwent full-scale renovation in 2008-2013. The display presents seven centuries of European art, featuring over a hundred paintings and sculptures. The collection initially focused mainly on Polish art, but after World War II it acquired a number of outstanding paintings and sculptures from Western Europe, including some from the Low Countries, such as Pieter Breughel the Younger’s The Sermon of St. John the Baptist, a Bishop’s Bust (c.1500), a Man of Sorrows by Jan Gossaert and a Portrait of a Boy with a Bow and a Dog by Nicolaes Maes.