With curator Dorota Dec to guide us, we have visited the selection of masterpieces of the Princes Czartoryski Collection, displayed in the Arsenal building. They include one of Rembrandt’s rare landscapes, Landscape with the Good Samaritan (1638), which was restored in 2003. We have also visited the manuscripts collection of the Princes Czartoryski Library. Most of the Netherlandish manuscripts here were acquired in Brussels and The Hague around 1810 by General Michał Sokolnicki  (1760-1816). Katarzyna Płonka-Bałus, curator of illuminated manuscripts, has shown the group several highlights from the library’s collections, including a number of fifteenth-century prayer books and books of hours from Bruges, Ghent, Haarlem, and Delft. 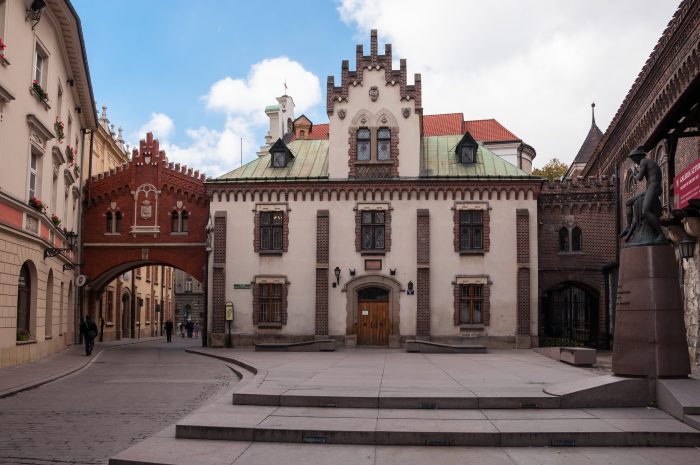 The Arsenal housing highlights from the Princes Czartoryski Museum, Cracow

The Princes Czartoryski Museum is the oldest museum in Poland open to the public. Its foundations were laid by Princess Izabela Dorota Czartoryska (1746-1835), who opened a museum near her residence in Puławy in 1801, six years after the partition of Poland among Russia, Prussia and Austria. Polish historical exhibits linked to the names of great historical figures and contemporary national heroes of the independence struggle were displayed at the Temple of Memory, while foreign exhibits relating to famous Europeans and numerous works of art could be seen at the Gothic House (opened in 1809). Izabela’s descendants continued the tradition of avid collecting she had initiated for many generations. Her son, Prince Adam Jerzy Czartoryski (1770-1861), traveled to Italy in 1798. There he acquired Leonardo da Vinci’s Lady with an Ermine, which is considered the most important masterpiece in Poland.

Much of the collection was moved to Paris around 1840 in response to the Partitions of Poland. It was expanded by the addition of several Netherlandish paintings in this period. At length the collection was returned to Poland, and the new museum opened in Cracow in 1876. The Czartoryski Museum and Library survived World War I (1914-1918) and continued to function in a regenerated Poland until World War II. During the period of Nazi occupation, a number of works of art, including Raphael’s Portrait of a Youth, were seized by the occupying forces and taken to Germany. Sadly, some were never to return.

The year 1950 ushered in a new stage in the history of the collection, which was not nationalized but incorporated into the administrative structures of the National Museum in Cracow. Two departments were formed: The Czartoryski Collections, housed in the old museum buildings, and The Czartoryski Library, which moved to its current premises at Św. Marka Street. The private collection, which remained uninterruptedly in the hands of one family (in the period 1992-2016 as the Princes Czartoryski Foundation, founded by Prince Adam Karol Czartoryski), was purchased by the Polish Government on 29 December 2016 (see our news item) and given the status of a national collection. It has been transferred to the care of the National Museum in Cracow as part of the country’s national heritage.