The Royal Castle is built on a hill near the Vistula River. This site has a long history, and has been inhabited since prehistoric times. Polish rulers first chose Wawel Hill as the location for their royal residence in the ninth century, and fortifications, castles, churches, and cathedrals were soon built there. The present Gothic Cathedral on Wawel Hill is the burial place for the Polish rulers and contains many chapels founded in their memory over the later centuries. The Royal Castle with its impressive Renaissance courtyard has undergone many changes over the centuries, as each ruler would make modifications to suit his or her taste. Besides the intrinsic fascination of this historic building, the Royal Castle is today one of Poland’s most important museums, with diverse significant collections. 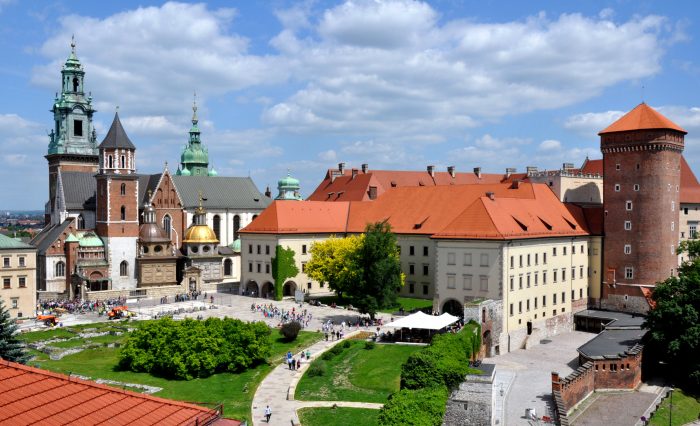 The curators Joanna Winiewicz-Wolska and Magdalena Ozga and conservator Jerzy Holc have guided us around the castle, focusing on the Dutch and Flemish paintings in the collection, including works by Pieter Coecke van Aelst, Ambrosius Benson, Jan Sanders van Hemessen, Bartholomeus Spranger, Frans Francken II, Govert Flinck, Jan Lievens, Michiel van Musscher, Jan van Kessel, Jan Verkolje, and Nicolaes Berchem. Equally important is the extensive collection of tapestries commissioned by King Zygmunt August (1520-1572) in Brussels and created in the period 1550-1560, 136 pieces of which have survived. Several tapestries were added to the collection in the twentieth century. These include a scene with the Death of Decius Mus after a design by Peter Paul Rubens, and two tapestries from a series depicting the Trojan War, created around 1660 in the Brussels workshop of Erasmus and Frans de Pannemaker.