Palace of Culture and Science (Pałac Kultury i Nauki (PkiN))

For those who are not afraid of heights: take the high-speed lift to the 30th floor (115 meters high), to the observation terrace of the Palace of Culture and Science (Pałac Kultury i Nauki (PkiN)), a building that continues to attract controversy. The skyscraper, a dominant feature of Warsaw’s skyline since its completion in 1955, was a gift from the Soviet Union and was originally dedicated to Joseph Stalin. Today it is a public building containing offices, a large auditorium, restaurants, a swimming pool, two museums, cinemas, theaters, and so on.

Just outside of Warsaw (7 miles from the city center) you find Wilanów Palace in the park of the same name. King Jan Sobieski III bought the grounds in 1677 and laid the foundations for the Royal Palace. It remained in the family for over a century until it was purchased by the politician and art lover Stanisław Kostka Potocki in 1799, who established it as a museum with his own collection in 1805. One of the highlights of this collection is Jacques Louis David’s equestrian portrait of the museum’s founder, Stanisław Kostka Potocki. The beautifully-decorated interior includes seventeenth-century painted ceilings representing the four seasons by the Polish artist Jerzy Szymonowicz-Siemiginowski. You can read more about the history of the collection on the website of Wilanów Palace. The Palace and Park are definitely worth a visit even if you do not venture inside. The Palace was damaged in World War II but unlike many other buildings in Warsaw it was not demolished during the Warsaw Uprising. The Palace and its holdings became state property after the war and in 1962 it was opened to the public. 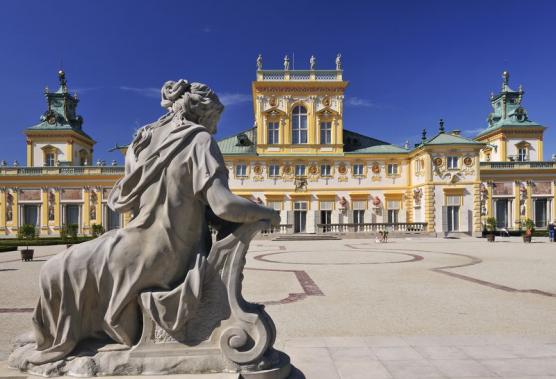