Not far from the congress hotel we find the Royal Łazienki Park. Here stands the Royal Łazienki Palace or the “Palace on the Isle,” which was the private summer residence of King Stanisław August. The palace is now home to the Royal Picture Gallery. In his thirty-year reign Stanisław August acquired close to 2,000 paintings, almost 360 of which were by Dutch and Flemish masters. The collection’s highlights are Gabriel Metsu’s The Washerwoman and Jacob Jordaens’s Satyr Playing a Flute. It is interesting to note that the Dutch architect Tilman van Gameren was involved in designing the Palace on the Isle during an earlier phase of construction in the seventeenth century before Stanislaw commissioned the renovation that took place in the eighteenth century. It is also highly probable that he designed the Hermitage, a small building in the park that was once the residence of the king’s mistress, Henrietta Lullier.

Other places of interest in the Royal Łazienki Park include the White Pavilion that was designed to house the king’s print collection, an amphitheater, Myślewicki Palace, and of course the beautiful gardens. The Old Orangery was erected in 1786-1788. Commissioned by Stanisław August, it consists of the authentic Royal Theater in the east wing, guest rooms in the west wing and the Royal Sculpture Gallery in the center. In the Royal Sculpture Gallery marble statues and plaster copies of the most famous sculptures of the ancient world, such as the Laocoon group, Hercules Farnese and Apollo Belvedere, are exhibited against the backdrop of illusionist architecture with an idyllic Italianate landscape. These murals were discovered in 2012-2013 during conservation work and restored according to the designs by Johann Christian Kammsetzer (1753-1795). 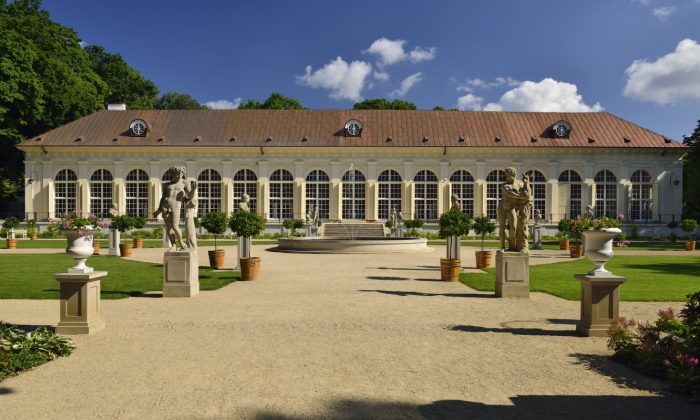 On the Monday evening of CODART TWINTIG we will dine at the beautiful Old Orangery. And on Tuesday one of the excursions will be to the Palace on the Isle, with a special focus on the collection of Dutch and Flemish paintings.
> Website of the Royal Lazienki Museum