Many seventeenth-century Flemish painters, including Peter Paul Rubens, Jacob Jordaens, and Cornelis Schut, were involved in the production of tapestries, conceiving of designs and in some cases, the cartoons used in their weaving. Yet, identifying the designer or the source of the design is not as easy as it appears and a number of seventeenth-century Flemish tapestry designs remain unidentified.

As this session will demonstrate, the act of identifying designers can lead to surprising results that add considerably to our knowledge of the documented body of work of both prominent and lesser-known artists. Two recent findings by Ingrid De Meûter will frame our conversation:

1. An altar frontal after an unknown design by Rubens (private collection)
In spite of stylistic similarities, the relationship between the altar frontal and Rubens was not immediately apparent due to radical divergences in format between the original design and final product. A lively point of discussion will be the ways in which this discovery recasts traditional ideas about invention, collaboration, and workshop practice in seventeenth-century Flemish art.

2. A tapestry carrying the signature of Lucas van Uden (Murau)
The discovery of this signed and dated tapestry confirms the attribution of a painting of the same composition. Moreover, it is an opportunity to consider the contribution of Flemish landscape painters to the production of tapestries with landscapes and small figures, an important genre in the 17th century and continuing into the 18th.

There are plans for an exhibition on this topic in 2014 and we hope to appeal for suggestions and ideas.

Dr. Yao-Fen You is assistant curator of European sculpture and decorative arts at the Detroit Institute of Arts (DIA), where her responsibilities range from medieval German and Netherlandish sculpture to eighteenth-century French silver, porcelain, and furniture to early twentieth-century British design. Short- and long-term projects include a monographic publication on the Arenberg Lamentation and an online catalogue of the DIA’s holdings in European tapestry. Currently, she is preparing a DIA exhibition on the House of Fabergé for 2012. Prior to joining the DIA, Dr. You held positions at the Fogg Art Museum/Harvard Art Museums, the J. Paul Getty Museum, and the University of Michigan Museum of Art. She received her BA in art history from the University of California, Berkeley and Ph.D. from the University of Michigan, Ann Arbor.

Yao-Fen You has been a member of CODART since 2004. 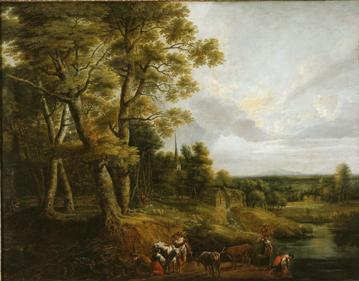 Dr. Ingrid De Meûter is curator of the collections tapestries and textiles in the Royal Museums of Art and History of Belgium in Brussels. She graduated as art historian at the University of Ghent (Belgium) and has written her Ph.D thesis on the production of tapestries around 1700 in Antwerp, Brussels and Audenaerde. She authored more than forty publications about textiles and tapestries including the catalogue of a reference exhibition on the production in Audenaerde (1999). Currently she is preparing a publication about the research and results of her Ph.D thesis. She is also working on an exhibition scheduled in 2014 about painters of landscapes and their contribution to the tapestry production in the Southern Netherlands in the 17th and 18th century.

Ingrid De Meûter has been a member of CODART since 2010.