Whether curators and conservators like it or not, collection mobility and facilitating loans are hot items. The well-known 2005 report Lending to Europe – downloadable at www.lending-for-europe.eu, a EU website devoted solely to this subject – makes it quite clear that a substantial number of museum directors and policymakers endorse this notion. Many politicians have since followed suit and demanded that museums and heritage institutions actively support mutual loans and the (inter)national mobility of works of art and collections.

This workshop is not about the desirability of lending and the mobility of art works. Rather, it is about a very specific underrated aspect that we all have to deal with, but about which most of us lack specific expertise in, namely insurance and its conditions. We all (should) know that the costs of insurance have risen enormously (and are still rising) and that the legal and technical complexity is great.

We begin the workshop by outlining the Vlaamse Kunstcollectie’s experience in preparing a (not yet realized) Flemish State Indemnity, as well as a (realized) non-insurance agreement for all loans between the museums in Antwerp, Bruges, and Ghent.

We can focus on issues such as why and how we insure; how we assess risks; how we determine values; and what the role of mutual (non-)insurance contracts between museums can be. 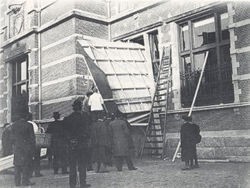 The following statements should help stimulate this discussion:
– Curators often have little if any knowledge of insurance issues.
– It seems to be a curatorial addiction to set the value of ‘their’ works of art as high as possible.
– Curators are ‘allergic’ to the word non-insurance.
– Only the insurance companies and their advisers stand to benefit.

This workshop is led by Till-Holger Borchert and Manfred Sellink of the Musea Brugge. Both are also on the board of directors of the Vlaamse Kunstcollectie or the Flemish Art Collection, which is the structural partnership between three art-historical museums in Flanders: the Royal Museum of Fine Arts Antwerp, the Groeninge Museum Bruges and the Museum of Fine Arts Ghent.

Till-Holger Borchert has been senior curator of the Groeningemuseum and Arentshuis, Musea Brugge, since 2003. He has curated several major exhibitions, including: Fake or not fake (…) (2004), Memling and the portrait (2005), and more recently Charles the Bold. Burgundy in its glory and decline (2008). His latest curatorial project, Van Eyck to Dürer. The Flemish Primitives and the East 1430-1530 opened in Bruges in October 2010. He has authored numerous publications on the Flemish Primitives.

Till-Holger Borchert has been a member of CODART since 2001.

Manfred Sellink is director of the Musea Brugge, where he began working in 2001. Previously, he worked for ten years as the senior curator at the Museum Boijmans Van Beuningen in Rotterdam and as researcher at Utrecht University. He is specialized in 16th-century Netherlandish art, in particular the prints, drawings and life of Pieter Bruegel the Elder. In addition to his position as director, he coordinated the major exhibitions related to Bruges Cultural Capital (2002) and had final responsibility for the international art festivals Corpus and Bruges Central (2005, 2010) in Bruges. He is an active member of the board of CODART, the Vlaamse Kunstcollectie, and various expertise commissions of the Flemish Community.

Manfred Sellink has been a member of CODART since 1998.