The Friends of CODART Foundation organizes special activities, such as a museum visit for all Friends and the Patrons Salon for major benefactors.

On Wednesday 28 October 2020 the Friends of CODART and the American Friends of the Mauritshuis jointly organize the webinar Reassessing Rembrandt in the Mauritshuis. Martine Gosselink, Director, and Quentin Buvelot, Senior Curator, will dive deep into the most recent art historical thinking about the work of Rembrandt van Rijn in the permanent collection of the Mauritshuis. With a total of 11 autograph paintings by the master and another 7 that entered the collection as Rembrandts but are now considered to be from his circle, the presentations will explore the perennial question of authorship, highlight new insights brought about by restorations in the last 25 years, and reveal the important role science and conservation have played in defining Rembrandt’s oeuvre.

Changing Perspectives
This year’s theme, Changing Perspectives, was discussed by Lea van der Vinde, curator at the Mauritshuis in The Hague, Epco Runia, Head of Collections at Museum Het Rembrandthuis in Amsterdam and Richard Kofi, artist, curator and programmer at Bijlmerpark Theater in Amsterdam. The morning was moderated by Ann Demeester, director of the Frans Hals Museum in Haarlem. More information and the full program can be found here. A report of the Salon can be found in the Newsletter. An account of the gathering, written by our Patron Zuzana Paternostro, was also published in the Brazilian journal ABCA, find it here.

The second BRAFA Day for Friends took place on Friday 31 January 2020. It included a tour of the fair by Luc Bertrand and a BRAFA Art Talk about Jan van Eyck by Till-Holger Borchert, Director of Musea Brugge. Please read more about the program in the invitation. A video recording of the lecture, produced by Biapal, can be found here.

The RKD Friends Society and Friends of CODART Foundation organized an afternoon for Friends at the recently renewed Museum De Lakenhal in Leiden, which included a visit to the exhibition Young Rembrandt – Rising Star and a lecture by curator Christiaan Vogelaar.

Real or Fake? Questions of Authenticity
During the Patrons Salon, which took place during TEFAF Maastricht 2019,  Dr. Robert van Langh (Chair at NICAS (Netherlands Institute for Conservation, Art and Science), Head of Conservation and Restoration at the Rijksmuseum Amsterdam and a member of the TEFAF Vetting Committee), Emilie den Tonkelaar (Old Master specialist at the art dealership Hoogsteder&Hoogsteder) and David Lainé (Senior Partner Painting Conservation and Research at IPARC, the International Platform for Art Research and Conservation) expressed their views on the technical examination of materials in relation to questions of authenticity and its relevance for private collectors. Their presentations sparked a lively discussion amongst attending Patrons and Business Sponsors, moderated by Mireille Pondman (director of the RKD – Netherlands Institute for Art History). More information can be found in the invitation.

BRAFA and the Friends of CODART Foundation organized an exclusive day for our Friends that took place for the first time on Friday, 1 February 2019 in Brussels. The day included a guided tour of the fair and a BRAFA Art Talk on Bruegel by Prof. dr. Manfred Sellink, General Director and Head Curator of the Royal Museum of Fine Arts in Antwerp. Please read more about the program in the invitation.

Old Masters – Old Fashioned?
That was the question at the heart of the Patrons Salon that took place on Saturday, March 11th during TEFAF in Maastricht. Bendor Grosvenor (art dealer, art historian, blogger), Stijn Alsteens (former curator of the Metropolitan Museum, New York, now attached to Christie’s), and Titia Vellenga (collector and chair of the board of the Friends of CODART Foundation) introduced the subject, after which an animated debate, moderated by Anna Tummers, curator of Old Masters at the Frans Hals Museum in Haarlem, took place with a packed audience of Patrons and special guests. Download the invitation for more information: Invitation Patrons Salon 2017, or find a more in-depth report in the Newsletter.

On this afternoon, CODART Members and Friends were invited to the festive inauguration of CODART’s new website at the Frans Hals Museum. The presentation took place during the exhibition Dutch Old Masters from Budapest: Highlights from the Szépmüvészeti Múzeum, which featured over 80 works by Dutch Old Masters from one of the finest museum collections in the world. The event concluded with a festive reception in the museum. The 2016 website renewal project was funded by grants from the Mondriaan Fund, the Dioraphte Foundation, and the Friends of CODART Foundation.

During this afternoon friends were taken on a tour through the exhibition Power Flower by Nico Van Hout, Curator at the Royal Museum of Fine Arts Antwerp. Also, Hildegard Van de Velde, Curator at the Rockox House, guided the group through the intimate museum. And last but not least, Manfred Sellink, Director of the Royal Museum of Fine Arts, gave a presentation about the major renovations taking place at the museum at this moment. All participants were treated to a festive reception afterwards. 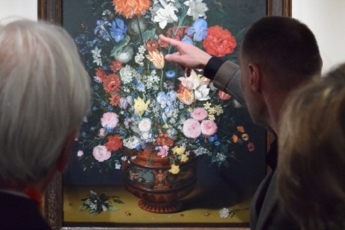 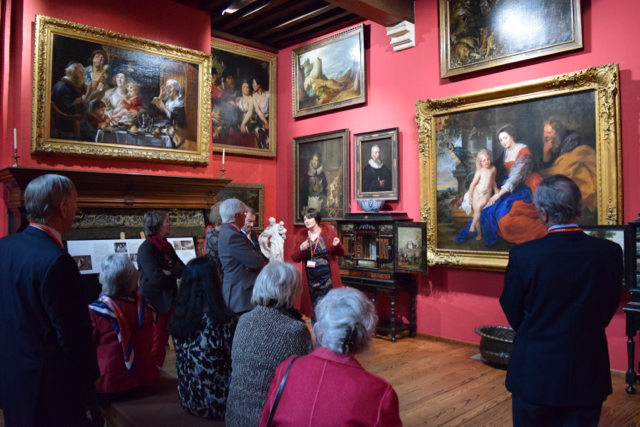 Contemporary or Antique Frames – How to Make your Decision? 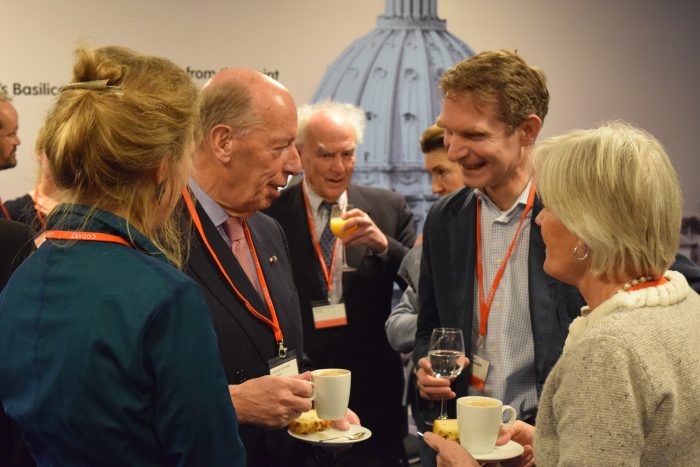 Participants having coffee at the Patrons Salon in Maastricht 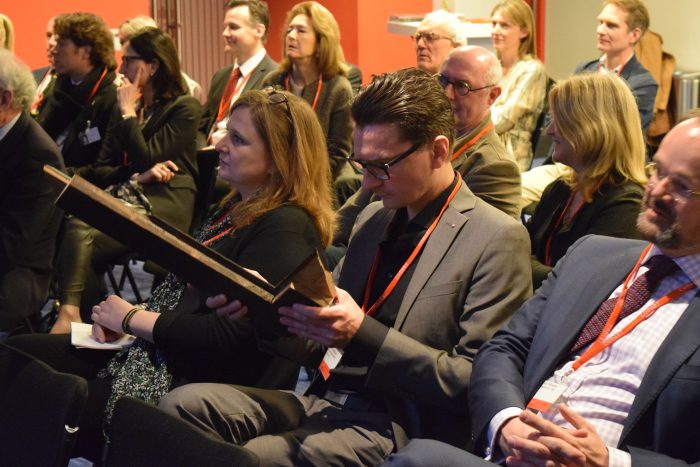 From 11-17 October 2015, CODART traveled to the Midwest, USA. This study trip was open to both Members and Patrons of CODART. Within one week the CODART bus took us to fascinating collections of Dutch and Flemish art in museums in Detroit, Toledo, Oberlin, Cleveland, Dayton, Cincinnati, Indianapolis and Chicago. Yao-Fen You, Associate Curator of European Sculpture and Decorative Arts and George Keyes, former Curator of European Paintings, both at the Detroit Institute of Arts (DIA), helped with creating an interesting program. George also traveled along with the twenty Members and ten Patrons that registered and provided valuable background information about the museums and the region. For more information about the study trip click here. 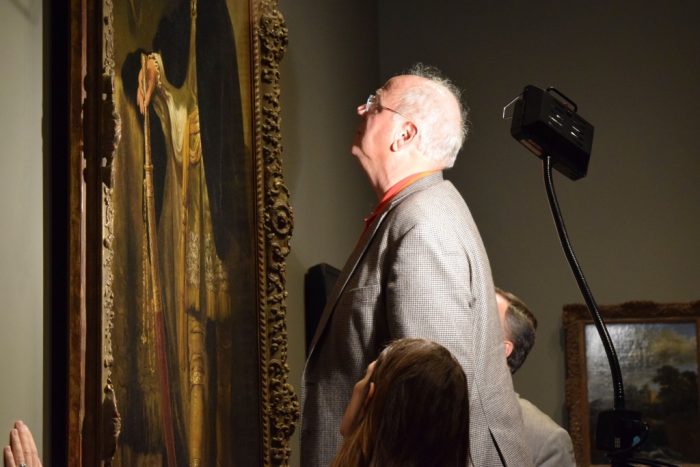 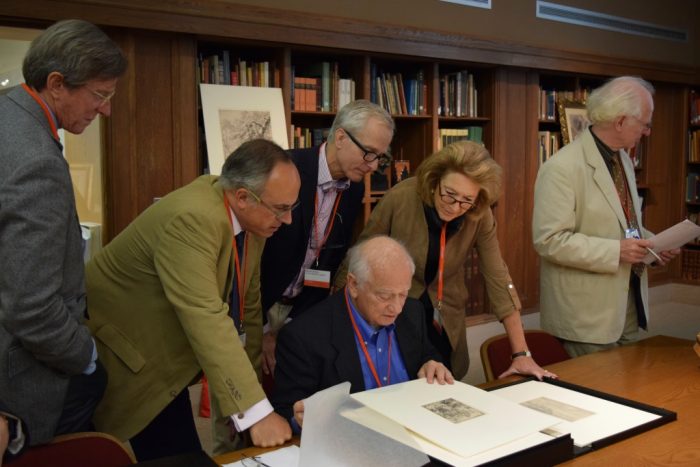 Oh My! – A Loan Request!
A CODART Patrons Salon with Willem Baron van Dedem, Leonore van Sloten and Bart-Jan Kastrop. Moderator: Pieter Roelofs
Read more information about this meeting in the invitation. Or read a full report in the Friends Newsletter, Summer 2015.

Grand Design: Pieter Coecke van Aelst and Renaissance Tapestry
This event was open to CODART Patrons and to all those who wanted to become acquainted with CODART and what it offers its benefactors. The Friends visited the private collection of Mr. and Mrs. Zukerman, followed by a private viewing of the Pieter Coecke van Aelst exhibition in the Metropolitan Museum of Art. In the evening dinner was offered by the Consul General of Belgium at his residence. In the early morning of 17 October the Friends were invited to visit the collection of Dutch and Flemish Old Masters in The Frick Collection.

The Collector and the Connoisseur
The Brian Capstick Collection is one of the finest private collections of seventeenth-century Dutch still lifes in the world. From an early point in his collecting career, the entrepreneur Brian Capstick started to seek advice from Dr Sam Segal, who is both a biologist and an expert in still lifes. As a connoisseur, Sam Segal helped Brian Capstick recognize the quality of paintings, which has been very valuable for him. It is great to see that they have become very close friends over the years. We organized a public interview with Brian Capstick and Sam Segal. Dr Adriaan Waiboer, CODART member and Curator of Northern European Art at the National Gallery in Dublin, discussed different topics with our speakers , like ‘What role can a connoisseur play in making these choices?’ and ‘Are connoisseurs necessarily good advisors?’.  A separate interview with Brian Capstick has been published in the CODART eZine in the summer of 2014.

The 100 Most Beautiful Rembrandts
On 12 December 2013 the Friends of CODART and Friends of the RKD visited Teylers Museum in Haarlem. Michiel Plomp, Chief Curator of the art collections, gave an interesting lecture on the appreciation of Rembrandt’s work. After this, everyone was free to admire Rembrandt’s wonderful drawings and etchings. The exhibition showed 100 of the most beautiful drawings and etchings by the master taken out of the museum’s storage rooms for the occasion. We ended this special afternoon with drinks in Café Stempels.

This year’s topic was the Maida and George Abrams Collection, which is one of the finest private collections of seventeenth-century Dutch drawings in the world. George Abrams, who formed this collection with his late wife Maida, told us about his experiences with the evolving art market over his fifty-year collecting career, and his successful cooperation with museums. Dr. Peter C. Sutton, executive director and chief executive officer of the Bruce Museum in Greenwich, Connecticut, discussed their cooperation from the museum director’s point of view. Susan Anderson shared her experiences as private curator of the Maida and George Abrams Collection.

On 19 December 2012 the Friends of CODART and Friends of the RKD also visited Amsterdam, where they attended a lecture and special viewing of the exhibition The Golden Age, birthplace of our world at the Amsterdam Museum. This enjoyable afternoon ended with drinks in the museum café.

In March 2012 the first Patrons Salon, titled Looking through a microscope, took place during TEFAF at the Stichting Restauratie Atelier Limburg (SRAL) in Maastricht. Dr. Ron Spronk, Professor of Art History at Queen’s University in Kingston, Canada and Affiliate Professor (Hieronymus Bosch and Early-Netherlandish Painting) at the Radboud University in Nijmegen gave a lecture. He illustrated recent developments by discussing his work on the famous Ghent altarpiece The Adoration of the Mystic Lamb by the Van Eyck brothers. After his lecture the CODART Patrons were given a tour of the SRAL.

In December 2011 the Friends of CODART invited its own Friends and the Friends of the RKD (Netherlands Institute for Art History) to the Rembrandt House Museum in Amsterdam, where they attended a lecture given by the director of the museum and were given a private tour of In Rembrandt’s Footsteps: Dutch Paintings from a Private Collection by both the director and the curator of the exhibition.