This year the CODART congress travels to Brussels. There is more to Brussels than just politics and for three days we will explore the artistic treasures this city has to offer. Brussels has always been a hub of trade, politics and culture within Europe. Attesting to this is its wealth of gastronomic delights, music, architecture and art. From Rogier van der Weyden and Pieter Bruegel to James Ensor and René Magritte, artists were drawn to Brussels for its rich cultural life and naturally commissions from wealthy patrons. Although much of medieval and Renaissance Brussels was lost when Louis XIV’s troops bombed the city in 1695, it still boast great architecture, particularly the splendid Art Nouveau buildings by Victor Horta. Of course, our congress host, the Royal Museums of Fine Arts of Belgium alone would justify a visit to Brussels, but there are many more museums and culturally significant institutions to explore, including the Royal Museums of Art and History (Cinquantenaire Museum), the Royal Library of Belgium and several churches, which are briefly described here.

The congress program kicks off with one of Brussels’ architectural highlights. Drop off your luggage at the Aqua Hotel and join the walking tour of several buildings designed by the Art Nouveau architect Victor Horta. Prof. dr. Werner Adriaenssens, expert on Art Nouveau, will guide us around this unique area. He will take us to the chic Louisa neighborhood, encompassing the Parisian-style Louisa Avenue that was built in 1847 to connect the city center with the Ter Kameren Forest. By the end of the 19th century, it was the location of choice for beautiful residences. We will pass by the homes of Victor Horta, Paul Hankar, Octave Van Rysselberghe, Henry van de Velde, Albert Roosenboom, and others. Make sure to pack your walking shoes.

After this introduction to the city, you will be ready for the congress program to begin. This year we have again succeeded in securing a royal venue for the CODART congress’ opening reception: registration and drinks will take place in Coudenberg, the former Palace of Brussels.

Once one of the most splendid princely residences in all of Europe, the royal palace on Coudenberg traces its roots back to the 12th century. Charles V personally oversaw the expansion of the complex during the first half of the 16th century. On 3 February 1731, a blaze raged through the palace, destroying half of it. In the 1770s, political good will and financial conditions merged and a large-scale architectural project to redevelop the entire court district was launched. The ruins of the old palace as well as numerous surrounding buildings were razed to make way for a new square: the Place Royale. The square was then lined with the neo-classical buildings that can still be seen today. Parts of the old buildings were preserved to function as cellars and foundations for the new structures. It is these remains that we will visit at the Coudenberg archaeological site. 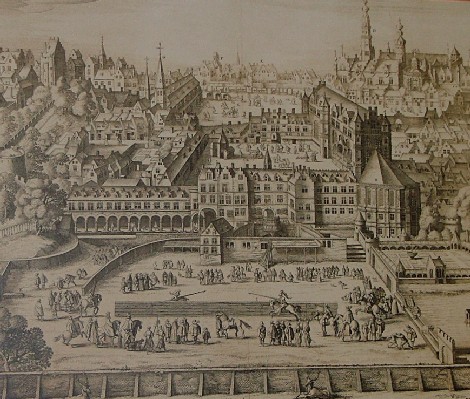 The palace of Coudenberg before the destruction of 1731

In addition to the Museum of Ancient Art, where we will be spending most of our time during the CODART VIJFTIEN congress, the Royal Museums of Fine Arts of Belgium also encompasses the Museum of Modern Art, the Wiertzmuseum (devoted to Antoine-Joseph Wiertz [1806-1905]), the Meuniermuseum and the Magritte Museum. The Museum of Ancient Art houses works of art from the 15th to the 18th century. The Flemish Primitives are represented by artists such as Rogier van der Weyden, Petrus Christus, Dirk Bouts, Hans Memling and Hiëronymus Bosch. The main focus of the 16th century is, of course, Pieter Bruegel and the Bruegel Room is one of the absolute highlights of the museum. With respect to the 17th century, a great deal of attention is devoted to Antwerp’s “big three”, Rubens, Van Dyck and Jordaens. The Dutch 17th century is also well represented, with works by Rembrandt and Hals to name just two. Additionally the museum has a fine collection of drawings.

Traditionally, we will be the only visitors in the museum on Monday, where the opening session with several lectures on the congress theme will be held. During a long lunch break you will be able to visit the collection and speak with the museum’s curators and the other attendees. Following the break we will spread throughout the museum for the Market of Ideas sessions. After this you will have some free time before dinner, which starts at 7:00 pm.

The Cinquantenaire Museum contains national archaeological artifacts from Prehistory to the age of the Merovingians, as well as finds from Egypt, the Near East and Iran, and Greece and Rome. Of special interest for CODART members is the European decorative arts department, which includes Flemish tapestries, sculpture from the Middle Ages to the 20th century, furniture and decorative art covering the full gamut of European styles. 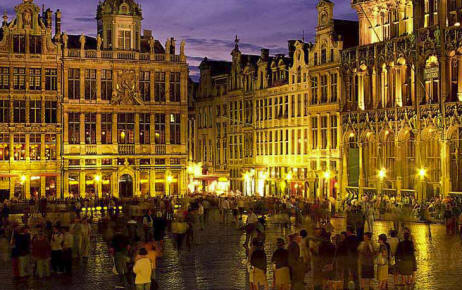 Tuesday afternoon is scheduled for excursions to various places of interest. View our special excursions webpage here. Among them are the Royal Institute for Cultural Heritage (KIK/IRPA), the Royal Library of Belgium and three churches.

We hope you will have some energy left after this to join us for informal drinks in the typical Belgian cafe near our hotel: Bar Le Trappiste.

We look forward to another pleasant and fruitful congress! See you in Brussels!