Excursion 1: visit to the applied arts collection of the Royal Museums of Art and History (Cinquantenaire Museum), Brussels

Madonnas with the Christ Child, finely carved ivory panels, and sumptuous gold and silver religious objects are shown side by side on the lower floor of what can be considered a great treasure chamber. The main attractions in this exceptional display are the reliquary of Pope Alexander and the portable altar of Stavelot Abbey, both dating from the mid-12th century. Sophie Balace, curator of metalwork and an expert on this period, will guide the group.
A series of 15 galleries provides a survey of decorative art from the Gothic, Renaissance and Baroque periods. One outstanding ensemble consists of the largest collection of wooden retables in the world. Ten complete examples are exhibited, including the world-famous Saint George retable carved by the sculptor Jan Borremans in 1493. A second exceptional display consists of approximately 25 tapestries, which are alternated on a regular basis. In addition, costly cabinets made in Antwerp are representative of the Baroque objects on view. CODART members Emile Van Binnebeke, curator of sculpture and furniture, and Ingrid De Meûter, curator of tapestries and textiles, will accompany the group.

Interior design from the late Baroque, the 18th century and early 19th century lead the excursion to what is called the Magasin Wolfer, a gallery devoted to Belgian Art Nouveau and Art Deco decorative art. On view is a unique collection of ivory sculptures, table silver, glassware and textiles by great designers such as Victor Horta, Henry van de Velde, the Wolfers Frères firm, and many others. Werner Adriaenssens, curator of 20th-century decorative art, will show us these Belgian highlights. 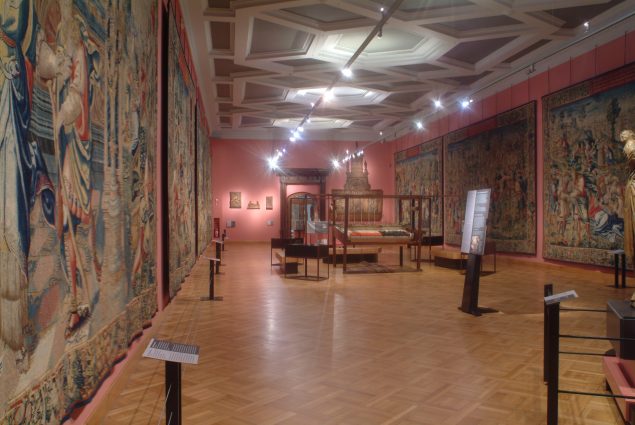 The Royal Institute for Cultural Heritage (KIK/IRPA), a major player in the scientific study, promotion and conservation-restoration of Belgium’s cultural heritage since 1948, is pleased to invite you on a guided tour. We are based in the green heart of Brussels, in a listed modernist building designed specifically for the multidisciplinary study of works of art. The specialists in the documentation, conservation-restoration and laboratory investigation of our national patrimony are eager to share and discuss their ongoing work with you.

The tour begins at the renewed Information Center, which comprises a specialized library, a vast photo library with over one million negatives, and the documentation archive of the Centre for the Study of the Flemish Primitives. We will then look more closely at current projects in some of the restoration studios. Among the objects in the workshop for polychrome wood sculpture are the Liège Passion altarpiece (attributed to the workshop of Jan II Borman) and the Christ from Cuesmes, whose original 16th-century polychromy is being meticulously uncovered. In the workshop for easel paintings the focus is on the present restorations of Jacob Jordaens’ Lamentation from the Antwerp Maagdenhuismuseum, Pieter II Brueghel’s Massacre of the Innocents from the National Brukenthal Museum in Sibiu and Albrecht Bouts’ Man of Sorrows from the Luxemburg Musée National d’Histoire et d’Art. The study of these works is explained with documents from our scientific imaging section, including macro-photography, infrared reflectography and X-radiography. The visit ends in the laboratory, which is specialized in sample analysis, dendrochronology and radiocarbon dating.

Excursion 3: visit to the drawings collection of the Royal Museums of Fine Arts of Belgium, Brussels

While the Drawings Department acquired some drawings in the 19th century, 1914 was a banner year: the widow of Jean de Grez donated around 4250 drawings from several schools and dating from the 16th to the 19th century. Since then, this core has been enriched with other acquisitions, as well as donations and bequests of works mainly by Flemish artists. Because the De Grez collection originated in Breda, the Netherlands, more than half of the drawings are from the Dutch School, by artists such as Hendrick Goltzius, Jacques de Gheyn the Younger and last but not least the undisputed virtuoso draughtsman Rembrandt (Man standing wearing a large coat and a broad hat). The substantial Flemish group includes works by Pieter Bruegel the Elder (Prudentia), Frans Floris, Maerten de Vos, Jacob Jordaens (Homage to Pomona, or the Allegory of Fertility) and David Teniers the Younger. There is also the world-famous Errera Album, which features more than 140 early 16th-century landscape drawings. 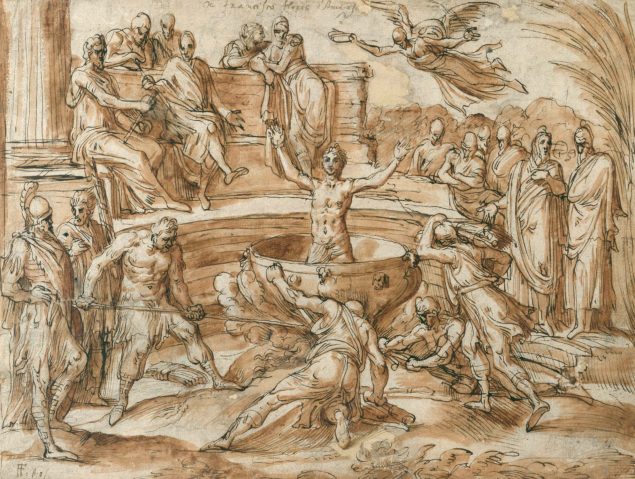 Excursion 4: visit to the stores of the Royal Museums of Fine Arts of Belgium, Brussels 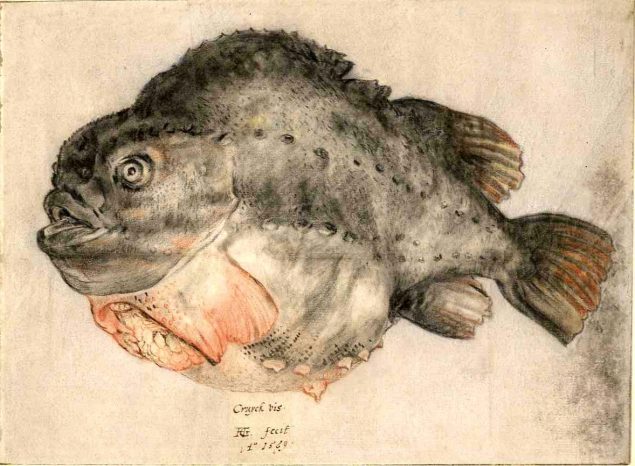 Excursion 5: visit to the prints- and drawings collection of the Royal Library of Belgium, Brussels

The Print Room of the Royal Library of Belgium holds the largest body of prints and drawings in Belgium and is one of the most important collections of its kind in the world. Begun in 1851, the inventory currently counts more than 700,000 individual items and series, ranging from masterful drawings by Bruegel, Rubens and Ensor to posters, photographs, popular prints and postcards. Netherlandish 16th and 17th century prints are particularly numerous. Most of the printmakers and publishers from this period are represented with many impressions in various states and the Print Room boasts the – almost – complete printed oeuvres of masters, including Lucas van Leyden, Pieter Bruegel the Elder, the Wierix brothers, Hendrick Goltzius and Rembrandt.

Research and acquisitions have traditionally focused on the print production in Antwerp and surrounding centers in the period 1500-1650, and on Belgian art on paper from 1830 to the present.

Apart from these two cores, the Print Room also contains important collections of prints from the German, Italian, French and Japanese schools. Rare and unique impressions of early engravings and woodcuts are kept in a special depot. The Chalcography Service associated with the Print Room manages a collection of more than 8000 printing plates in wood and copper, including works by Goltzius, the Wierix brothers, Lucas Vorsterman, Cornelis Schut, Paulus Pontius, Félicien Rops and James Ensor.

Located near the former ducal palace, these three churches are among the most important in Brussels. They still contain prestigious artworks attesting to their glorious past.

The cathedral was originally a chapel dedicated to Saint Michael and may have been built as early as the 9th century. In the 11th century it was replaced by a Romanesque church that was designated a collegial church in 1047. In the 13th century, the building was renovated in the Gothic style. The choir was built between 1226 and 1276, and the facade was completed in the mid-15th century. The cathedral is renowned for its stained glass windows designed by different artists, including Nicolaas Rombouts, Bernard van Orley, Michiel Coxcie and Theodoor van Thulden. It also houses major sculptures and monuments by Conrad Meit, Jan Mone, Robert de Nole, Lucas Fayd’herbe, Hieronymus Duquesnoy the Younger and Hendrik Frans Verbruggen, as well as paintings by Michiel Coxcie and representatives of the Brussels landscape school, Jacques d’Arthois, Lucas Achtschellinck, Daniel van Heil and Ignatius van der Stock.

Construction of the Church of Our Lady of the Chapel was begun in 1210 and completed by the end of the 13th century. It thus marks the transitional period between the Romanesque and Gothic styles: the transept and choir are Romanesque-Gothic, while most of the rest of the building is in the Flamboyant Gothic style. Several rounds of restoration and renovation took place in the 19th and 20th centuries. Like the cathedral, the church contains some beautiful sculptures and monuments by Hieronymus Duquesnoy the Younger, Lucas Fayd’herbe and Pierre-Denis Plumaier, among others. It also features an important group of paintings by the Brussels landscape school and several works by Hendrik de Clerck and Gaspar de Crayer.

The Church of Our Lady of the Sablon was built in the Gothic era (14th to early 16th century) under the auspices of the Guild of Crossbowmen. It was drastically restored in the 19th and early 20th centuries. It is known for the chapel of the Thurn and Taxis family. Completed in 1678 after designs by Lucas Fayd’herbe, it is one of the most beautiful extant ensembles in Brussels. Moreover, with works by Fayd’herbe, Mathieu van Beveren, Gabriel Grupelle, Hieronymus Duquesnoy the Younger and Jan van Delen it is a veritable sculpture museum in miniature.